Jacob Schwartz is a rich New Yorker that has spent many years in India studying mystical stuff and yoga. He is the absentee head of a charitable foundation funded by an inheritance from his shady uncle. Blake House is one of their holdings and is an apartment co-operative where some crazy suicides have been happening recently. Jacob is sent home by his teacher to deal with the bad spiritual mojo happening at the building. He goes back to find that some shit is going down. There is a Satanist, a witch, nasty real estate guys, his cousins hate him, and generally everyone is a jerk. None of these characters are working together towards their evil plans, they just generally all are up to no good in and around the Blake House.

This might be one of the worst books I’ve ever read. The narrative starts off fairly straightforward with the main push of the plot being a witch trying to get some revenge for the death of her mother. It initially tries to set things up with a heavy matriarchal bent. The witch has an agenda that includes women being powerful. But that is almost immediately tossed away when the same character then is shown to be psychic and able to influence people with her mind. But then she has spell books and collects components for her castings in a most unpleasant way. But then she is psychic again. I don’t know if the author ever figured out what exactly he was going for. The plot never defines the villain or her agenda or even what the hell she is. 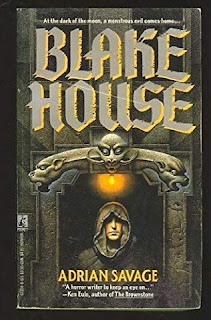 The writing itself is terrible. Characters are introduced and quickly forgotten or buried for long stretches only to show up again to die. This means that I was having to stop and figure out who the hell I was reading about. I kept having to backtrack to find out who the latest death was. This is further confused when more characters appear in the story with the idea that maybe I should know who they are, only to find out that they weren’t introduced at all and exist solely to die a couple of pages later. In particular there is a couple that jumps from the roof of Blake House, so they can land on a mother and her children who were also just introduced so that the author can describe a fetus popping out of its mother’s stomach!

Normally I don’t make things personal when reviewing but this author, Adrian Savage, is an asshole. This book is so freaking racist in the most casual of ways. There is a black female character that spends most of the story being used as a sex partner for the white males in the book. She also happens to have conservative views, so the more “enlightened” white characters call her an “Aunt Thomasina”. Yeah white characters calling a black character an Uncle Tom. We also have a Jewish character named Ira that is described as an ugly large nosed hairy man. Was the author looking at some Nazi literature when creating this character? These are just the two most obvious examples but there is shit like this all thru the book.

I’d never heard of Adrian Savage before. He only wrote two books this being the second of them. I honestly don’t know how this got published. I could see the content I mentioned above being in a book from the sixties or seventies, but this was published in the late eighties. By then crap like this didn’t make it to print. Toss in the fact that in general it is just a poorly written piece of garbage with lousy characters and a muddled plot that makes zero sense it boggles my mind it ever made it past an editor and onto the shelves. Don’t read this book!