I’ve been on a paperback kick lately. Reading any cheesy horror book the more lurid the cover the better! Nightwing the book caught my eye and I enjoyed it so much that I had to track down the movie. I posted the book review, so I thought I’d give you the movie review as well. 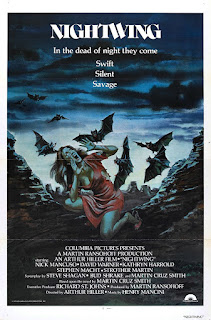 This is your basic Jawsploitation with a twist. Instead of a shark we have a colony of vampire bats flying around draining everything and everyone that they meet. At the beginning of the story they are only in the desert near an Indian reservation, but soon they may threaten the large cities. The only thing preventing that is tribal deputy Youngman Duran and scientist Phillip Payne. Not only will the bats kill you, but they also carry the plague so even if you escape you are liable to die and take many others with you.

Unfortunately, another ambitious chief, Walker Chee, is anxious to do business with the oil companies that want to harvest the shale underneath some sacred grounds that also happen to be where the bat colony is roosting. He wants to keep things quiet and ignore the problem in pursuit of profits. This also plays into a subplot involving Youngman’s uncle Abner who has used his magic to end the world. The movie hints that he uses the bats to stop the violation of the sacred land. Without spoiling anything it actually does sort of work out that way.

Nature running amok to get revenge on the human race and all the terrible things that we do to the planet was popular in the seventies. From Jaws to William Girdler’s dynamic duo of Grizzly and Day of the Animals this theme popped up constantly. Nightwing isn’t one of the better entries into the subgenre but it isn’t bad either. The story is predictable, and we get all the expected tropes. No one can believe that there are animals that dangerous running or in this case flying around. There is a businessman trying to cover things up for the sake of making money. You also have the outsider scientists that comes to save the day with his knowledge. All the bases are covered. 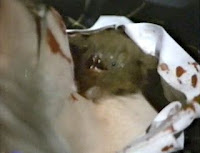 The special effects work is okay. You have bat puppets used for the close-ups and there are several instances of actors holding the animatronic puppets against themselves as they “struggle” with them. There are also scenes where the puppets fly directly at the camera with the thin filament visible to the audience. There are also some strange shots where it appears shadows of the bats swarming were added to the film. It ends up looking more like little black blobs floating around than it does hundreds of bats. I know I’m sounding negative but for me this all adds up to some cheesy fun. I 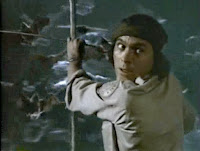 grew up on this kind of effects work and still dig it. I just mention this because others don’t find it as charming as I do. Here Nightwing does show its age.

I can’t say that this is a good movie. Compared to the previous mention Girdler flicks or the equally fun Prophecy it looks bad. But if you have seen those flicks and want something similar then give Nightwing a look. I’m glad that I did and recommend that you do too. Just manage your expectations. If you took the time to check out my review of the book linked at the top of the review you will notice this is one of the few times that I think the movie was better than the book.