The Spear by James Herbert

Are there better villains than the Nazis? They are so hated that the protagonist of your movie or book can pretty much do whatever they want to them and the audience nods in agreement that they deserved their horrible fate. That must be why so many creative storytellers used them as the go to bad guys. Though author James Herbert outdoes most of them with The Spear.

While not mentioned it is assumed that the story takes place in the late seventies due to the age of some of the characters. Harry Steadman is a former British soldier who fell in love with a Jewish woman and ended up spending some years in the Mossad, the Israeli intelligence agency. After she is killed it is hinted that he goes on a killing spree getting his revenge before retiring with all the violence burned out of him. Now he spends his time as a private detective in London. But the Mossad comes around asking him to find a missing agent. He refuses but then the body of his partner is crucified on his front door! But that still doesn’t do it. It isn’t until MI5, the British intelligence agency, shows up and forces his hand that Harry finally gets involved.

The rest of the story involves Nazi secret cults, lots of cloak and dagger, unmanned killer tanks, and believe it or not the ghost of the Fuhrer. Though not the one you are thinking of. Steadman is joined by a couple sidekicks as he tries to unravel the secrets that have been kept for more than thirty years. Most importantly why the secret organization is so interested in him and how he plays into their twisted prophecy. 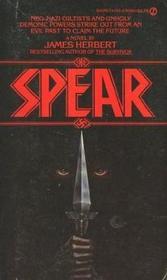 This was a real page turner, one of those books that hooked me and kept me up reading all night. The story hits the ground running and never lets up. There is mystery and murder right from the start. The identity of those doing the killing and their motives is slowly unraveled so that it isn’t until the last fifty or so pages that you actually begin to see the entire picture. And while The Spear starts off as more of an action/spy story there are supernatural elements that later become central to the plot and drive the narrative. This one is a good time from start to finish.

The main character of Steadman is very interesting. Even after his partner is nailed to the front door of his house he still refuses to be sucked in to the violent cycle of revenge. Way too many stories like this have the main character switch on “kick everyone’s ass” mode on far easier than what we get in The Spear. That was refreshing. Even after he is forced to defend himself, he tries to show some mercy. This is juxtaposed with the pure evil of the Nazis. One is a torturer who not only spews hatred and kills for sport, but actually does it with joy in his heart. The guy enjoys his work! The person who you think is pulling the strings is twisted in his own way but turns out only to be a puppet of the real evil. Can’t say much more without spoilers.

There is only one thing that gives me pause about the book. There is one character that is revealed to be a “freak” and an abomination used to try and corrupt Steadman for the Nazi’s twisted ritual. As nasty as some of the characters in the book are, they are bad guys, so their awful words don’t bother me. But Steadman thinks and says some terrible things and as I consider him the voice of the author that bothered me just a bit. Not enough to not recommend the book, but I’m afraid that it might trip up some readers. Please take that into consideration before grabbing yourself a copy. I can’t be more specific because it would spoil a pretty big reveal.

I am going to recommend The Spear. Herbert does a fantastic job engaging the reader and is worth the price of the paperback.