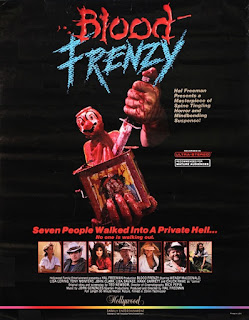 Yikes! I’ve been scraping the bottom of the barrel during this fifth slasher movie marathon. I do have some good stuff that I’ve been saving for later. Blood Frenzy isn’t one of those good ones. It is however the second part of the Lisa Loring aka. Original Wednesday Adams slasher double feature. Her other entry is the previously reviewed Iced which is the more famous of the two because she shows a lot of skin… like basically all of it. Enough of that nonsense let’s get to the plot of Blood Frenzy.

The movie opens with a kid playing with a jack in the box. Their drunken father comes in and tosses it away. He removes his belt and is about to beat them when he trips and falls. That gives the kid a chance to pick up a gardening tool and tear out his throat with it. All this happens without us ever getting a close look at the kid. This is important later. You know basically because the kid is the killer so plot twists and all that good stuff. Well not really good…

Years later a doctor is taking some of her patients into the desert to help them deal with their emotional and psychological issues thru some drastic group therapy. After setting up camp and a session they go wandering around. One of them hears the jack in the box playing in the night, which I suppose is some sort of foreboding. The killings also start that night with blame being shifted from one patient to the other before everyone is convinced that it must be Vietnam vet Rick. More people die, secrets are revealed, last minute twists introduced, and the killer’s identity is revealed. Just about what you would expect in a slasher flick.

That last sentence is important to this review. It feels like someone made a list of what the better slasher movies did and went down it checking boxes off. You have lots of red herrings, suspects that are clearly not really the killer. There are so many that it becomes clear that something else is going on and that the movie is trying too hard to be clever. The plot also randomly introduces another character towards the end to make some other potential plot holes work. Basically, they needed an excuse to explain how a character could have been with the rest of the group and be the killer. Answer… random brother that isn’t mentioned until later. All of this combined with some terrible pacing makes for a tough watch. I got thru Blood Frenzy, but it was a chore.

How are the kills you might be asking? We get seven, which is okay. The first kill is a nifty throat gouging/slashing. They must have liked it as well because they use it again and again. Four of the seven kills are the same throat slash effect that we have already seen. The other three is a stabbing that they cut away from, a sign running thru someone with a poorly executed gag (he is clearly holding it on the side away from the camera, and finally an axe to the back. That last one is okay but doesn’t make up for the generic kills that take up the rest of the action.

The identity of the killers is obvious if you have ever seen a slasher movie before. Again, it is clear that the filmmakers were copying what they had seen in other slashers when making the movie. Despite that they still chose to make the killers generic and forgettable. Toss in some bad performances and you get a flick that isn’t worth spending your time or money on. I don’t recommend it.