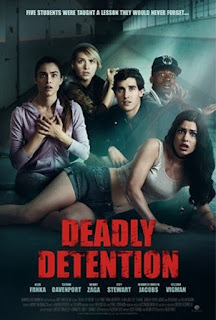 This looked like a newer slasher flick, and I suppose in a way it is. That said movies like Deadly Detention are why I have trust issues. I’ll explain that later in the review so stay tuned. Until then let’s talk about the plot.

The movie opens with some shaky camera action as people are being chased. Then we backtrack to find that a group of high school students are serving detention at a decommissioned prison. That seems odd but there is a throwaway line of dialogue about the high school having an infestation of possums. I suppose that explains it. In addition to the students, we have the principal and a bus driver. They get locked in and sure enough people start getting killed, eventually. The surviving students are led thru the prison by a mysterious voice over the intercom who locks and unlocks doors herding them towards something. Stuff happens, there is a twist, and mercifully the movie ends. Though not without flipping the bird to the audience one last time.

This is a bad movie. The pacing is terrible as they take way too much time establishing the characters that are nothing more than typical stereotypes. The angry loaner, the weirdo, the nerd (this time a religious kid), the jock, and the super vain horndog. We have all seen these before and don’t need twenty minutes of filler establishing them. Yeah, it takes twenty minutes for anything to happen. When things finally do get rolling it is disappointing, but I’ll talk about the kills later.

In addition to being slow Deadly Detention has a very predictable plot. I recognized the killer and their motivations the second they were mentioned. The fact that during their big rant they brag about how they manipulated the situation by planting the possums didn’t help make things any more believable or fun. Maybe it is because I’m a jaded old horror fan but there was nothing interesting or engaging about the story as it was so easy to figure out. There is one attempted twist at the end, but I found it dumb. 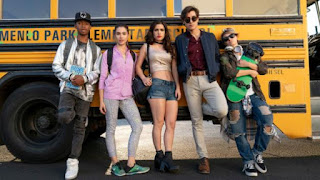 I do want to acknowledge that the tone of the movie sort of feels like it is supposed to be funny. Are they attempting to play this one for laughs? Well, if they are, they failed at that too. There are a couple times where I was a little amused, but Deadly Detention isn’t all that comedic. I think it is possible that the filmmakers didn’t know what they wanted to do and managed to fail at both horror and comedy.

Last thing I want to mention are the kills and special effects. Every kill happens offscreen and there is very little gore ever shown on the screen. We only get to see a bit of blood after the fact. Top it off that there are only five kills in the entire movie, and you have a slasher that doesn’t measure up. But then there really aren’t five kills. As I mentioned above, I think that this was being played for laughs. That is cemented in my mind when a character that was clearly stabbed to death suddenly returns and, in a toss away line of dialogue right before the end credits lets on that all the other victims are still alive. Including the kid that clearly bled out and the girl whose head was repeatedly smashed until a cell door was able to close on it! What the hell movie?

This is a bad one that I’d recommend everyone skip. I have no idea what they were thinking other than toss a bunch of ideas on the screen and see if any of it worked. Well, nothing did and I can think of many better options to watch when you want some teenagers picked off by an angry killer bent on revenge.