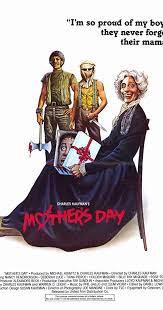 The slasher marathon continues with Mother’s Day. This is a movie that I’ve been meaning to watch for a long time, but just never got around to cracking open the DVD. Then it showed up on the Last Drive-in with Joe Bob Briggs and I figured this was a great way to watch the movie. Honestly, I feel a bit dumb waiting so long.

Things get rolling with a motivational speaker spewing crap at an audience who is eating it up. Afterwards a couple of hippie types ask an old lady for a ride, clearly up to no good. But before they can get up to anything the car breaks down and some guys from the nearby woods come out and kill them. The old woman is Mother, and these are her boys Ike and Addley. You want me to be interested in your flick kill some hippies!

hen we meet a group of girls who have been friends since college. They like to take trips together every year and this year they have decided to go camping in the woods. Guess who they run into! Before you know it, the girls are being assaulted, chased, and pushed to their limits as the insane family uses them as practice. I think that Mother is training her boys to be the best serial killers ever. It must be something like that with all the training montages which is a first for slasher flicks or at least the first I’ve seen.

I really liked this movie. It is a bit weird that the killers, especially Ike and Addley are the most likeable characters in the movie. They have a goofy sort of dynamic between them that is kind of appealing. Of course, they also murder and rape so that isn’t good. How writer director Charles Kaufman pulls this off I don’t understand. It shouldn’t work with the tone shifting so radically from scene to scene. And yes, Kaufman is the brother of Lloyd Kaufman and this is a Troma movie. Though it is much different from the goofy flicks we all expect from them. This is a nasty and at times brutal movie. Though again the most disturbing bit is how much it makes you like the killers. If all feels a bit greasy but in a good way. 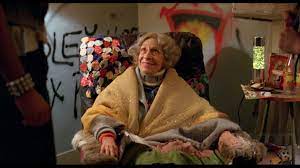 The kills are decent for an early eighties’ movie. We get a respectable six kills with two early on and then the rest towards the end. That leaves a long stretch without any deaths, though they do make up for it with some other horrible things. Some of the kills are tame like a dude getting choked and one character that just dies quietly after being brutalized. We do get death by Drano/Television, some hatchet work, and a head lopped off. Though my favorite kill is death by plastic boobs. I can honestly say I’ve never seen that before. All this action is topped off with a twist ending that I didn’t see coming but loved. This final surprise also involved some makeup work as well, which was cool looking.

I debated if I should add this to the slasher marathon. While it has the rape/revenge storyline this also has the gore, stalking, and nudity that are all hallmarks of the subgenre. So, I figured why the hell not include it. Though I’d be hard pressed to argue with someone who thought it didn’t belong I feel like it does. Again, I really liked this one and recommend that everyone give it a chance.

Posted by Gutmunchers Lives at 8:40 AM