Okay I have some housekeeping items before we jump in on this one. First Knight is a pseudonym for author John Brosnan. I mention this because while all the print copies of this book that I’ve found are under the name Knight I think there are some digital versions floating around under the Brosnan name. The Second item is that while this novel was adapted for the screen by Roger Corman’s New Horizon company the movie has little in common with the book. Finally, you might notice some similarities between the dinosaurs and more importantly their creation between this book and Jurassic Park. This book came out several years before that one so this isn’t a rip off of that more famous book. In fact, one might even say… nah I’m not going there. Okay now onto the review.

The story is set in rural England with our main character being a reporter at a local paper. His name is David, and he is tired of working for a small outfit that bends the knee to those in power. Basically, any juicy story is killed by the local elites. This is especially so when it comes to Lord Penward. When one of Penward’s big cats gets out and kills some neighbors he uses his money and influence to hush it all up. But David, along with his beautiful ex-girlfriend Jenny, get wind of something big. Though instead of working together they act more as rivals both trying to get the scoop. This includes David sleeping with Penward’s neglected wife to get closer to the estate. After a lot of drama and emotional baggage, none of which I was the least bit interested in, the action starts. If the title hasn’t given it away Lord Penward was hatching dinosaurs using DNA and chicken eggs! And he just doesn’t have one like the title of the book insinuates but many. They all get loose and start eating people, which is when things get nasty. 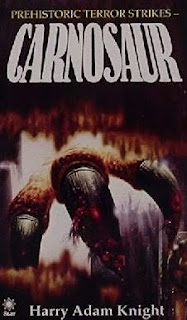 I really did like this book. The story meanders a bit at the beginning, though we do get a couple early attacks to spice things up. There is a bit too much intrigue and the affair between David and Lady Penward takes up far more of the early story then it should. The same goes for the subplot between David and his ex-girlfriend. Things are only interesting when the dinosaurs break free and go on a rampage. Though I will say that my complaints are mitigated by writing that is accessible, and a story that is plotted out well making it is easy to follow. That helps the early stuff at least flow quickly. The book is also short barely topping two hundred pages.

I should also warn readers that this book is written very much in the style of men’s adventure magazines. What I mean by that is the women are either the damsel in distress or the nymphomaniac unhappy wife. David beds both and at time treats both badly. I don’t think in any way that it takes away from the story but if you are sensitive towards that sort of thing then I figured I should let you know.

Carnosaur is a fun book and an easy read. I blew thru it in a couple of hours and while not a book that engrossed me it was fun. Though be warned that if you are looking for literature this isn’t it. What we have here is the print equivalent of a seventies drive-in monster movie, which I dig. If you are in the mood for that sort of thing then I highly recommend Carnosaur.