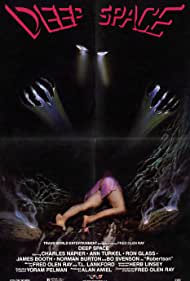 I’m not a huge fan of Fred Olen Ray, but I dig where he is coming from as a fan of sci-fi and horror. Occasionally I do end up enjoying his movies, but when he is bad… he is really bad. So where does Deep Space fall on that spectrum? Let’s look and see.

The movie opens with a satellite crashing to Earth. On that Satellite is an experiment that the military and the mad scientist guys don’t want anyone knowing about. The latter insists that the project is dormant, but when some kids show up, they get killed by it. Then we meet some cops played by Charles Napier and Ron Glass. They are the bad asses that get suspended after a shootout but are immediately called back to investigate the crash. Their boss is played by Bo Svenson. We also get some footage of Julie Newmar as a psychic who keeps calling Napier’s character with her visions.

Finally, you can toss in Ann Turkel as the new lady cop who ends up in bed with Napier’s character and becomes part of the chase. See they found these egg things at the crash site that hatch into baby versions of the creature and after killing them they track mama down to a warehouse where Napier’s character must go mano y monstero. Oh, and Bo Svenson shows up with a gun to participate in dispatching the monster.

Deep Space is a derivative flick that is trying to copy things from all the more popular big budget monster movies of the eighties. The creature is clearly an Alien clone, the crash and rock thing on the ground cracking open is very reminiscent of the Blob, Napier is certainly channeling his inner Tom Atkins as he does battle with the creature. There is nothing new here. I will also readily admit that at times the movie can be slow. Whenever they try and develop the characters things grind to a halt. But happily, this doesn’t happen too much. 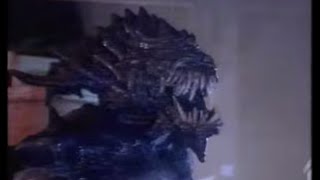 Okay now that I have all the negative stuff out of the way let me tell you this. I like this movie. The creature, while not at all original, is very well done for the low budget affair that Deep Space was. It looks decent enough on screen and director Ray knows how to shoot around its weaknesses most of the time. There are a decent number of kills, though the gore isn’t explicit. We do get to see some limbs tossed around.

But this isn’t the best part of the movie. That is the excellent cast of “B” actors. Bo Svenson, Charles Napier, Ann Turkel, Ron Glass, and Julie Newmar are all great in their roles. Sure, some of them are limited and the writing isn’t very meaty, but my inner nerd loved seeing them on the screen. Plus, these are all veteran actors and can make something out of nothing. Napier does a great job dropping some funny lines like, “I’m gonna kick some monster ass.” and “…somebody’s got to come down and clean up the mess ‘cause I’m gonna make a big one.” Maybe it is cheesy, but I loved it. I know that I started this review off by saying I'm not a big Fred Olen Ray fan but now I'm not so sure. I think I need to track down more of his movies and give him another chance.