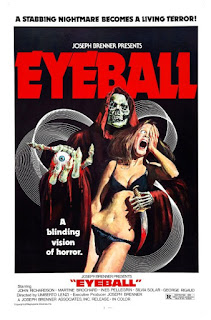 My very first Giallo marathon kicks off here at the site. I thought it would be fun to start things off with some Umberto Lenzi goodness. Yeah, it is time to watch Eyeball, where a tour group in Spain has to deal with a homicidal maniac killing off women and cutting out their left eye. Sounds like fun, no?

In case you are new to Gialli let me explain what we are looking for. You have a killer who is wearing gloves, normally black. There is also a lot of twists and turns before the killer is revealed. The movies linger on the kills and the twisted they are the better. And finally, there has to be a bit of sleaze, including a lot of nudity. The name Giallo comes from the Italian word for yellow, which was the color used on the covers of most of the books that inspired these movies came in. Now that we are set, we can continue.

The movie starts in an airport where we see a woman, who we later find out is Alma, changing her flight from New York City to Barcelona. That is important later. Then we meet our main cast of vacationers from Burlington Vermont on a tour of Spain. Not long after arriving in Barcelona the group is nearby to where a young girl is killed, and her left eye is removed. One of the women on the tour, Paulette, bumps into the man whom she has been having an affair with. His name is Mark and if you haven’t guessed it yet his wife was Alma from earlier. We also have a photographer and her girlfriend, a grandfather traveling with his granddaughter, and a few others. Now that we have our characters in place let’s talk the plot.

After the first girl dies, we get several more deaths. All along the way suspicion is thrown from one red herring to another. Is it the angry wife Alma? Or maybe the creepy tour guide who keeps playing practical jokes? Hell, it might even be Mark since he seems to brood a lot and is already cheating on his wife with Paulette. So many suspects are suggested and then discounted by the inspector. The inspector who we find out at the beginning of the killings only has a week before he retires! He is definitely getting too old for this shit! Does he solve the crime before he goes fishing? Of course, he does. Really this is a mystery movie so they have to solve it before the end credits roll.

Referring back to what I’m looking for out of a Giallo we need to take a critical look at Eyeball. First, we have a really cool killer in this movie that has a unique look that the plot takes a lot of time to explain. Early on it rains and the tour company provides all of them with identical raincoats. When we see the killer, all wrapped up in the red raincoat, we have no idea who it is. That means the movie can actually show us the killer attacking the victims without doing a perspective shot or hiding them in some other way. That was pretty damn cool.

The movie is paced excellent with the kills spaced out evenly while presenting and then occasionally discounting suspects. I was guessing until the very end as to who it was. Though I was a bit annoyed that the killer was revealed to be someone that they had carefully kept out of the suspect list. Damn I suppose that is a spoiler… The resolution comes from information that the audience never had. That said the twist as to why the killer was taking the left eye from their victims was satisfying and more than a bit fun.

The deaths are a bit tame and we only get six in total. But we do have a neat eye stabbing scene and a throat getting cut nicely on screen as well. This isn’t the bloodiest Giallo that I’ve seen there are far more explicit ones out there. Speaking of explicit we do get a bit of sleaze with some nudity and hinting at offscreen girls “enjoying” each other. Again, I’ve seen other movies in this genre that go way further with it then Eyeball does, but I still dug it.

You know I’ve said in the past and I think that it is still the case that Eyeball is an excellent gateway into Gialli. It is a bit tame in the gore and sleaze, which is likely a good thing for newbies. It also has a very linear storyline that easy to follow. The deeper you go into this genre the more you need to understand the weird leaps in logic that the viewer is expected to make, so again this is a great place to dip you toes in the water. Eyeball is a movie that gets revisited by me every few years. I dig this flick and recommend that everyone check it out.

Posted by Gutmunchers Lives at 11:12 AM