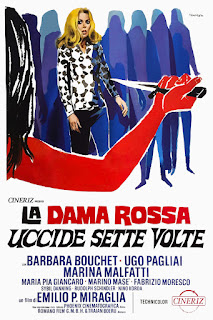 The movie opens with two little girls, sisters Evelyn and Kitty. Kitty is playing with her doll when Evelyn snatches it away from her and runs off with it. Eventually the pair end up in a room with their grandfather who tells Evelyn to give it back. Instead, she grabs a knife and stabs it repeatedly. That girl might have some issues. All of this takes place in the shadow of a painting of a woman stabbing another. He tells them the story of the Red Queen and the Black Queen as well as why it is important. The family is cursed and every hundred years there are seven killings that revolved around a pair of sisters. I’m sure that won’t important later…

Fourteen years later the girls are grown up. Evelyn has left for the United States and has cut off all contact with the family, Kitty is a successful photographer for a fashion house, and we meet a third granddaughter Francesca who with her husband lives with and takes care of their grandfather. It is also about time for another batch of murders to take place, at least according to the family curse. A mysterious woman shows up in the elderly man’s bedroom and scares him to death bringing Kitty back for the funeral. Though Evelyn is nowhere to be found. That might also be important later.

We are introduced to some other characters like Kitty’s boyfriend, the boyfriend’s crazy wife who is institutionalized, a model named Lulu (played by a very young Sybil Danning), a family friend named Rosemary, and others. Some are victims and other suspects as they mysterious woman in red aka. The Red Queen starts stabbing her way thru the cast. But who is the killer and how do they connect to the family curse? Is there even a connection or is it simply someone trying to get ahead at the fashion house? There are so many questions to be answered.

This is another fun Giallo that is new to me. Because I enjoyed this one so much and spoiling the plot would kill the fun for first time viewers, I’m going to be very careful to keep this review spoiler free. The story is solid and while it has a lot of characters and subplots, I found things easy to follow. They do a fine job of not only giving us a few suspects, but also keep us guessing as to the motivation of the killer. Is it all about the family curse, or perhaps the inheritance after the grandfather dies, or maybe even taking control of the fashion house? The first death is the managing director who was in the way of Kitty’s boyfriend taking over. So not only do we not know who the killer is, but the motive is kept vague until the end as well. That is a nice twist.

Part of the movie is set at the family estate, which is an old castle with hidden rooms and a creepy basement. This is used to great effect for a couple of scenes, including the ending which was great. When not at the castle the movie is filled with all sorts of groovy seventies locations that are also a lot of fun. I mean nothing quite looks like décor from the decade of disco and the clothes… just wow. Toss in a groovy soundtrack and you get a flick that is entertaining on many different levels.

As for the other hallmarks of a Giallo, violence and sleaze, The Red Queen Kills Seven Times gives us both. Sybil Danning plays Lulu, a model who I’m fairly certain is allergic to clothes. She runs around seducing and blackmailing people until she picks the wrong target and ends up dead. Yeah, don’t threaten to expose a homicidal maniac with a body count because they might just decide to add you to the pile! We get a plentiful nine murders in this one,  mostly stabbings with a fun death by car door and fence spikes tossed in for fun. One of the kills is not only violent but a good jump scare as well. All in all, this movie gives me what I want from an entry into the subgenre.

This is a cool flick that I enjoyed the heck out of. A movie like The Red Queen Kills Seven Times is why I decided to do a deep dive on Gialli. I have seen most of the well-known ones or those from filmmakers that I was aware of like Argento and Bava. But I know I was missing out on other flicks like this one. I highly recommend that everyone check it out.