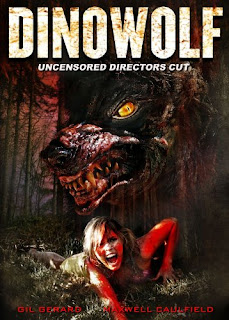 Time for some more Fred Olen Ray in my life! This time I check out a gem about a science experiment gone horribly wrong. Things kick off with a science lady doing science stuff. A critter gets out of a tube kills a security guard and spoilers… the science lady! Then we meet an OCD sheriff and his adopted son who is a park ranger. Stuff happens, Gil Gerard calls some agents… we only ever see him on the phone, but it is Buck Freaking Rogers! Eventually we find out that the crazy science people made a half man half dire wolf hybrid. That explains the terrible Halloween werewolf costume! Another science guy is killed, and the military loses their weapon when the critter is killed by our heroes.

This isn’t a good movie, but it is fun. Director Ray knows what he is doing and manages the audience’s expectations nicely. The sets are super cheap and the monster, which we see early, is too. The plot is straightforward and follows most if not all the monster movie tropes we are used to. It’s by the numbers here folks and that isn’t a bad thing. The familiar path does have the movie dragging a bit in the middle and the who lives and who dies is predictable. It would have been some fun to see a twist or two, but we don’t get that. Still, I found the movie to be worth a watch.

I say that because the execution is solid and the cast entertaining. In addition to Gil Gerard, we also have another favorite Maxwell Caulfield as Sheriff Parker. He is clearly having fun playing up the quirky aspects of his character, especially his OCD. Though that doesn’t end well. But it is funny. The rest of the cast I recognize from other low budget productions and honestly, they are all okay. Of course, the above is helped with a decent script and a tight runtime of eighty-six minutes. This makes the previously mentioned slow spots brief and therefore bearable. Let me just say this again, Fred Olen Ray knows how to make a fun flick on the cheap.

The characters are introduced after some killings, the story tosses in enough fodder to give a decent body count. The gore is on a budget and mostly forgettable, but there is a decent kill with a victim getting shredded on screen. In addition to the nods that I was enjoying to the genre in general I loved the fact that they basically lifted the ending from Thing from Another World to defeat the creature in the big finale. Again, no original but sort of fun to see a movie fan like Ray tip his hat to a classic.

Fred Olen Ray’s stuff is a mixed bag for me. Some are decent and some are downright awful. But the one constant is his love for the horror and sci-fi genres. Dire Wolf feels like an old school cheapie monster movie from the fifties, and I think that is why he was going for. If it was then he hit it out of the park. If that isn’t your kind of movie then maybe this one isn’t for you.

Posted by Gutmunchers Lives at 4:52 PM