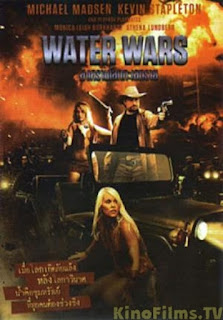 This is an interesting movie that recently popped up on my radar. It was pitched to me as a Filipino Mad Max clone directed by Cirio H. Santiago, who worked on some of my favorite drive-in flicks like TNT Jackson, Vampire Hookers, and The Big Bird Cage. This was the last movie he directed, and Roger Corman produced it! It was so disappointing.

The movie is set on a post-apocalyptic Earth where the most important resource is water. The oceans and rivers have dried up and warlords control their territory by hoarding it and doling it out as they please. One of those warlords is Bane, played by Michael Madsen. He captures a beautiful blonde lady who has a tattoo that lets them know she, according to legend, belongs to a tribe that has a pure natural spring. Realizing the power this would bring him Bane tortures her to reveal the secret location.

Another beautiful blonde gets into a bar fight and is saved by Slade. He is our good guy/mercenary. She offers him a bunch of water to save her sister, the other blonde. He assembles a team of mercenaries, and they go off to save her. They do so and then are betrayed by a dude that was of course going to do that. Bane and the boys show up to attack the nice people and Slade saves the day. Some sad shit happens and then it rains. On a world that is a desert, but it gives him a dramatic scene at the end so cool… I guess. 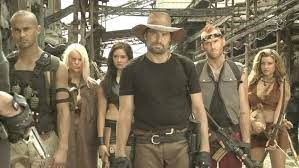 If that plot sounds a bit thin there is a reason for that. This movie is filled with footage from other movies. According to IMDB there are four flicks cut into this one. Almost all the action sequences aren’t new and most of it doesn’t match. This includes a bit with characters that have nothing to do with the story and never get names! Some of the reused footage is from an earlier movie that this is supposed to be a remake of! What happened? After poking around a bit, I think I have found the answer.

Santiago was only able to work on this movie for a few days before getting sick. Jim Wynorski was brought in to finish the movie. I like the guy, but I don’t think he had much if anything to work with here. If that wasn’t enough of a concern Wynorski’s name is nowhere on the credits that I could see so it appears even he disowned this one. I also noticed that Santiago sadly passed away six years before this movie was released. That means that is sat around for a while. It has the feel of a release that was tossed together to try and salvage the money spent on a doomed project.

I know that this review has been light on the merits or lack of for Water Wars as a movie. That is because this incoherent mess of cobbled together excerpts doesn’t feel at all like a movie at all. If you had any question as to where I stand on Water Wars I hope that answered it. Stay far away from this turkey.

Posted by Gutmunchers Lives at 10:34 AM