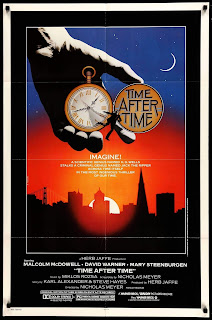 It might seem that I’m exclusively a horror dude here at the site. But I’m also a huge fan of science fiction including non-horror sci-fi without monsters trying to destroy cities or invading the Earth. Time after Time was a favorite movie of mine growing up on that I haven’t seen in years. I was almost afraid to check it out again for fear that it wouldn’t hold up. I shouldn’t have worried.

The movie is set in Victorian England where author H.G. Wells is having a dinner party for his friends. The occasion is for him to show off the time machine that he has just invented. One of his guests, Dr. Stevens, arrives late. He has a good excuse though since he is Jack the Ripper! The police arrive shortly after and when he realizes he is cornered he jumps in the time machine to make his escape. Knowing that no one would believe him Wells decides to pursue him to the future to stop the murder spree he has unleashed on the future.

Wells arrives in modern day (nineteen seventy-nine) San Francisco. Stevenson realizes he has been followed and tries to convince his friend that he belongs in the future. That our violent world was made for him and that he should leave him there. When Wells refuses to go back to his time alone it sets into motion a battle of wits between the two men. Wells also has taken up with a woman named Amy, who Stevens has kidnapped to use for leverage. Everything comes to a head with a big showdown between the two men in a museum exhibit.

This is an excellent movie that held up for me today just as it did when I first saw it decades ago. The story is a fun alternate history of H.G. Wells and Jack the Ripper. The story is exciting and keeps the audience guessing at what will happen next. It also tries to explain the historical events thru its own fictional world. I appreciated the effort, and it shows that this was a solid script that was well thought out. The direction from Nicholas Meyer, who also wrote the screenplay, is fantastic. The man made some great movies as a director and wrote even more. Hell, he wrote the screenplay for one of my favorite drive-in movies Invasion of the Bee Girls. 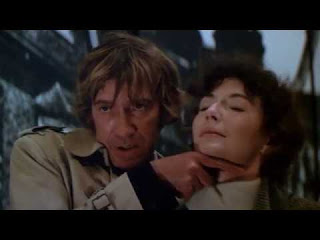 The cast is amazing. We have solid performances from Malcolm McDowell as Wells and Mary Steenburgen as his girlfriend Amy. There are also many other familiar faces in the cast that I won’t point out here as I don’t have the space. Though hands down the best part about Time after Time is David Warner as Dr. Stevens aka. Jack the Ripper. He is menacing in a very polite way that I found disturbingly Victorian. His performance is subdued and frighteningly realistic as a killer who knows what he is and simply doesn’t care. Though I guess maybe that is called into question at the end, but I won’t spoil it with details.

The special effects here are limited to the steampunk looking time machine and a light show when they travel from era to era. It might seem dated to an audience used to CGI, but I rather like the old school vibe to it. Again, even if it doesn’t work for you, it is hardly on the screen and not terribly important to the plot. I guess I should mention that despite this being about Jack the Ripper the kills are almost nonexistent. But then this isn’t that kind of movie so you shouldn’t expect any gore.

I have always loved Time after Time and this most recent viewing hasn’t changed that. If you haven’t checked it out, then you are missing some of the best science fiction that the seventies had to offer. Do yourself a favor and track down a copy. You won’t be disappointed.