Sherlock Holmes and the Deadly Necklace (1964) 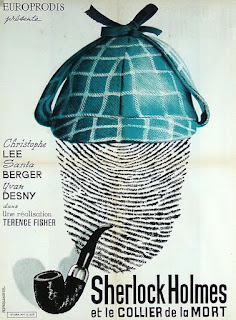 I’m a big fan of detective movies but I haven’t spent much time here at Crappy Movie Reviews covering them. I had questioned if they fit with what I was trying to do here, but then I started my Giallo marathon and figured that it was my site so what the hell. As a bonus this movie stars horror icon Christopher Lee as Holmes, so there is that as well. If you don’t like me covering these sorts of movies, I guess let me know by dropping me an email. Now onto the review.

The fun starts with some kids tossing rocks at a body in the harbor. I guess this is to establish London and the locals. Soon afterwards we see Holmes in disguise watching a particular ship in the harbor. He is doing this because his nemesis Professor Moriarty is making daily trips to meet the incoming ships. Turns out he was waiting for a couple of men, one of whom ended up floating in the harbor! This is part of a plan to get some revenge on a fella named Blackburn who stole a priceless necklace that they had stolen from Cleopatra’s tomb. Bodies start to drop as the professor and his men get up their criminal business. In the end Holmes figures out the mystery and thwarts Moriarty’s plan to add the antiquity to his personal collection. Though it isn’t enough to put the professor in jail, so the movie ends with Holmes and Watson setting off in pursuit of more evidence.

This isn’t a very good movie, and I was more than a little disappointed in it. Though I am glad to have scratched it off the to watch list. There are a couple of good things like some surprising attempts at humor that land and Christopher Lee is also good in the role. But the story is a little confusing as it meanders along. We get introduced to a wife of Blackburn as well as the man she was having an affair with. This bit seems to exist only for us to watch Holmes run around figuring things out without the help of the police. This leads me to another issue I have with this flick. The best mystery movies give the audience some clues as to what is going on letting us guess as the solution. Here Holmes hops around and then reveals all without any clues being shared with the viewer. That is a pet peeve of mine and it bugged me.

This West German production has some other quirks that I wanted to discuss. The soundtrack is filled with a lot of jazz music, but I think that it is set in the twenties, so I guess that works. Though it feels much more like sixties jazz, which was sort of distracting. Yes, there is a difference! The movie also suffers from some bad dubbing. I’m a big fan of Italian flicks so dubbing doesn’t normally bother me. But the voices here don’t seem to match the characters. I’m also not sure that they had Lee dub his own dialogue in English. I mean he might have, but if so then he did it without any inflection. This was also distracting.

In the end this oddity is probably only for fans of Lee and of the Sherlock Holmes character. Again, I was very happy to finally scratch it off of my to watch list, but it’s not a good movie. I’d recommend the old Basil Rathbone movies or the Jeremy Brett television show for your consulting detective needs.