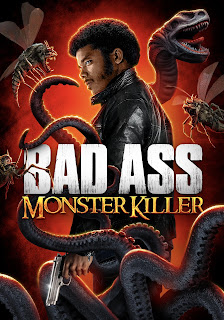 Jimmy Chevelle is the monster killer mentioned in the title. He rolls around Camaroville killing all sorts of Lovecraftian horrors while scoring with the ladies. It’s okay though because he works for the Department of Supernatural Security which gives him his badge and gun! Thru a series of flashbacks, we see that his former partner was murdered by a cult lead by the most evil of dudes the Reverend Dellamorte. Their latest plan is to summon the bride of Cthulhu while cornering the weed market so they can distribute a special blend that will encourage the citizens of Camaroville to join their cause. Jimmy and his various lovely sidekicks must stop the bride and save the day. Even if he gets kicked off the force.

There is a lot to like about Badass Monster Killer and a lot that goes sideways. The good stuff is that they totally nail the dialogue and characters. This is a blend of Blaxploitation and Mythos monsters done on a budget. There is a groovy vibe, and it is a bit repetitive but silly fun to watch Jimmy dropping the same pickup line on different ladies before killing the bad guys and taking them back to his pad for some grown up time. This isn’t being played seriously but for laughs and honestly it works well. I liked the cast, and the actors have some chemistry with one another. Plus, it is clear that they are having fun, which is a must for a flick like this. We also get many pretty women in skimpy outfits as well as some topless ladies in the few scenes set in strip clubs. Hey, the bad guys even have topless dancers, which really is a must have for any secret lair in my humble opinion. 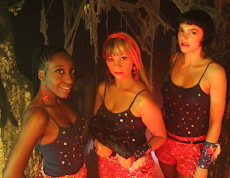 I was shocked at how the various Mythos creatures are accurately named and the job that the filmmakers did to bring them to the screen. Who the hell knows what a Shoggoth looks like, other then a Lovecraft nerd like myself that is. They did a decent job with the creature design and by God it is latex and rubber. We also get a spine ripped out, a fun looking bride of Cthulhu complete with he “squid chin”, and some cool body melts as the “acid titties” take their toll. There are a few shots with puppets and some miniature work that I thought was a lot of fun. I dig it when a movie tries to give me some old school effects.

Sadly, there is also a lot of badly done CGI here as well. Giant monsters stomping around, heads popping off, and many kills are cringeworthy. I get the lack of budget and can forgive the above but then they double down. Most of the movie is shot on a green screen with a comic bookish looking city scape behind them. Hell, most of the movie was likely show with a green screen and a few bits of furniture used to dress the different “sets” which are again just green screen and not actual locations. This feels like a flick that was shot completely in a warehouse. I can forgive some bad effects work but at least have some sort of gritty locations to shoot scenes in. The damn movie is almost completely set in a sketchy strip club/cultists hideout and in an alley. Would that have been too terribly difficult?

The other thing that sort of bugged me was the length of the movie. This is a fun gimmick, but it will wear out its welcome sooner rather than later. This flick clocks in at a surprising hour and thirty-six minutes! Why? There are a few characters that could have been deleted and jokes that didn’t need to be revisited. For example, the dumb investigators that keep popping up only to get their noggins ripped off aren’t necessary. Same goes for his inspector who brings nothing to the story. One of the things that I notice with a lot of low budget filmmakers is that they either edit the movie themselves or hire someone as equally invested in everything they shot. You could have told this story with a lot tighter runtime, which would have helped immensely. Cut fifteen minutes and this is a way more fun experience.

Now I didn’t hate Badass Monster Killer. It was a fun mashup that treats both the subgenres (Blaxploitation and Lovecraftian Mythos) with respect. But perhaps they were a bit too ambitious with their available resources and needed an editor to cut things down. Still, I’ve seen much worse and think that there enough going for it to check out the movie.