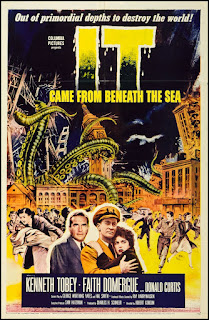 This movie finds us watching the crew of an American nuclear submarine on maneuvers in the Pacific. The sonarman lets them know that something is shadowing them and then accelerates to intercept the sub. They are grabbed and stuck fast no matter how much they push the engines. Rocking back and forth they finally get free but when they look, they notice something odd stuck to the hull. Something biological!

One of our three main characters is the sub commander Pete. When he goes to see what the scientists think we meet the other two. Dr. Carter and the lovely professor Lesley Joyce. Hint… she is the love interest! The three of them get swept up in trying to convince the military that a huge octopus is out there wrecking ships and killing folks. Then after it has become obvious it is up to them to sort out how to stop it before it wrecks San Francisco. Yeah, this is the movie where the giant octopus destroys the Golden Gate Bridge. Who wins and who dies? Let’s just say there is a special on calamari for the foreseeable future.

This is one of those monster movies that I grew up watching as a kid. It was on heavy rotation with our local horror hosted programs, and I always dug it. The story is very simple but delivers the goods with enough creature mayhem to keep me occupied. The cast is filled with decent actors, and I have to say that the beautiful Faith Domergue, playing Lesley, was certainly interesting to an adolescent me as well. Kenneth Tobey as the sub commander Pete was also the first time that I noticed an actor in more than one role. He also starred in one of my favorites, The Thing from Another World.

The highlight of It Came from Beneath the Sea then and now is the monster. This is brought to the screen with a combination of rear projection and stop motion animation. These old school special effects always make me smile, especially when they are done well. Considering that the legendary Ray Harryhausen was responsible for the monster and the models it crushed it is no wonder that I loved this one so much. If you are looking for a fun creature feature, you could do a lot worse than this. 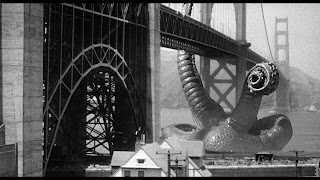 So far I’ve mostly talked about what I loved about the movie as a kid growing up. While I still dig it, I must be honest and admit that this time around I noticed how much stock footage was used. We get lots of jets, navy ships, and various ordinance expended in pursuit of the creature thanks to grainy footage of the real thing. Most of this is narrated which only goes to make it even more obvious. I was surprised to hear that It Came from Beneath the Sea was a lower budget movie, but that does explain a lot. Rumor is that the octopus in this movie only had six tentacles to save money. It didn’t ruin things, but it also bumps it down a bit from the other classic Harryhausen flicks that are out there.

This movie is well worth checking out. If for nothing else than the iconic attack on the Golden Gate bridge. Whenever you see a documentary discussing the fifties and sci-fi movies that is always in the mix. Might as well check out where it came from.

Posted by Gutmunchers Lives at 10:00 AM