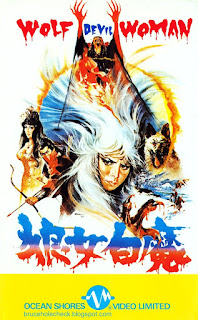 I don’t think that I’ve covered a Kung Fu movie here at the site before (I now realize that I had - John) so I thought that a movie like Wolf Devil Woman would be a good place to start. I mean I think that there is a sort of werewolf/horror twist to it. But I’m not sure since this seems to be a rather obscure flick and one that I’ve not seen before. Might as well jump in and see what I’ve gotten myself into.

The movie begins with a masked guy torturing a guy by doing horrible things to a voodoo doll of him. Some folks are watching on in horror, including a young couple and their infant child. Then we see them running away while being chased by a bad guy in a rubber mask and some ninjas. There is some Kung Fu fighting and realizing they are no match the couple stabs each other and then smash their heads on a mountain to cause an avalanche. They are going to leave the fate of their infant daughter up to the mountain.

The baby survives and is raised by wolves so that she is more animal than human. That also means she has wolf style Kung Fu and stuff. Another Kung Fu guy comes along to do battle with the Demon (the bad guy from earlier) and the now grown-up woman crosses his path. Some stuff happens and then they do battle with the Demon. There is a twist, but the bad guy is still defeated. The now less than animalistic wolf woman, the Kung Fu guy, and his comic sidekick all live happily ever after… at least I think so.

I’m not being dismissive or sarcastic when trying to give you all a plot synopsis. This is about the best that I could do to make sense of it because Wolf Devil Woman is a complete mess of a movie. There are multiple jumps in time that are only noticeable because the girl goes from infant to toddler to adult. Though none of this is explained or even acknowledged. Seriously if you had looked away for a minute you might not even realize that it is supposed to be the same character. I’m also not entirely sure why the Demon is so obsessed with her because she apparently was just a few miles away growing up and he didn’t go looking for her, though he sure as hell wanted her captured or maybe dead at the start and at the end. Why? I wish they would have tried to explain that.

Now this sort of odd narrative is fairly common in Kung Fu movies. But what is unforgivable for this kind of flick is terrible fight choreography, which we sadly get here. There aren’t that many fights and what we do see are not put together or presented in an engaging or interesting way. I had hoped for the occasional bit of Kung Fu to spice things up but instead they are as boring as the rest of Wolf Devil Woman. Movie you had one job that could have saved the day… and you failed!

Toss in some bad dubbing, even for a movie from this genre, as well as some odd costume choices (she wears a stuffed animal on her head) and you end up with a painfully slow way to kill an hour and a half. I’ve seen much better and hope to cover some of them for Crappy Movie Reviews in the future. Until then all I can say is skip this one. You will thank me.

Posted by Gutmunchers Lives at 8:50 AM