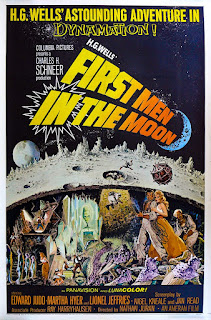 Time for some classic science fiction here at the site. This movie is based loosely on the H.G. Lewis novel of the same name. Things kick off in the “present” of the sixties as the first manned mission to the moon lands. They promptly discover a flag from Victorian England that claims the moon for the queen! Those in charge back on Earth do some digging and find a man named Bedford in an old folk’s home. He tells them a tale from decades earlier about he and his companions traveled to the moon and returned.

Bedford is living in a cottage trying to finish his great play when he fiancé Kate arrives. The pair end up entangled with Professor Cavor who lives nearby and warns them he is doing some dangerous experiments. Basically, he has discovered an element that cancels gravity and with this he has planned a trip to the moon. Bedford mortgages his cottage, which turns out not to be his, to finance the trip. To do this he has Kate sign a lot of documents that leaves her holding the bag. Yeah so our hero is a bit of a con man I think. They make it to the moon where Bedford immediately responds to the locals, an insect like race that lives below the surface, by killing a bunch of them. Quick questions, are we supposed to like the hero? More things happen before Bedford and Kate make their escape leaving the professor behind because he wants to try and work with the aliens.

This is a bit of fun science fiction from the mid-sixties that I’ve always enjoyed. Though I will admit that it takes a while to get rolling as they don’t even leave for their trip until the forty-five-minute mark. Before that we get a lot of character development. Now that I’m older I found myself not liking the character of Bedford that much. He is less a charming rogue and more of a hustler. Luckily, I still think that Lionel Jeffries as Professor Cavor is still a great character. This is helped by a subplot of him trying to explain to the alien race about mankind’s propensity towards war and violence, or more accurately apologize for it. This is from Wells’ original writing and I’m glad it was brought over. As a kid I never much noticed but now it is obvious to me that Wells was trying to make a point.

What wasn’t in this book and seemingly was lifted from War of the Worlds is the fate of the aliens on the moon. Professor Cavor his sneezing a bit here and there and when the astronauts finally arrive to the subsurface city, they discover that everything is deserted with the inhabitants long dead. I guess the moral to the story is to not bother trying to make friends and understand each other because you will just end up killing them with the common cold! This is a much darker and depressing ending then I remember. It doesn’t fit the more upbeat fantasy vibe that the rest of the movie sets up. I found it all a bit jarring.

Hands down the best part of First Men in the Moon are the special effects. The sphere in which they travel to the moon has a cool steam punk vibe that works perfectly. The aliens are brought to the screen with some decent costuming and masks. We get some solid composite shots establishing the action on the moon. But the absolute coolest stuff is the stop motion effects work from the legendary Ray Harryhausen. We get some great insect creatures as well as a killer giant caterpillar that I think may be a bit carnivorous. I love old school special effects and it doesn’t get any better than this man’s work.

In the end despite the flaws in the story and pacing I’d still say it was worth checking out the movie for Harryhausen’s work alone. I know that isn’t a glowing endorsement of First Men in the Moon, but I think that it is an honest one.

Posted by Gutmunchers Lives at 1:37 PM