note: This review is part of a bigger series on the Blood Island trilogy which itself is part of my look at the Filipino horror and exploitation movies of the late sixties, seventies and eighties. While it isn’t necessary to read those, I would recommend starting at the beginning as I refer back to the other movies covered in my reviews. Click here for the full list of what I’ve covered. 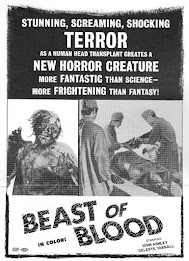 I guess that it would make sense that the next movie I cover be the third entry into the Blood Island series. Though some say there is an earlier movie and others say that there are sequels. I’m honestly just a bit confused by it. But if we are counting the creative team of Eddie Romero and star John Ashley then this is the third of the series. But then I think the pair worked on another movie that some people consider part of the trilogy… You know I think I’m just going to get to the review.

Unlike the first two movies that shared the setting of Blood Island but weren’t connected otherwise Beast of Blood is a direct sequel to Mad Doctor of Blood Island. Though they do use a convenient boat explosion to explain the characters that survived Mad Doctor not appearing in Beast of Blood. That might annoy some fans, but I applaud the effort made to explain it away. Who returns? Well we get John Ashley back again as Bill Foster. Also coming back is Dr. Lorca and his number one henchman Razak. And of course, the beast/monster from the prior entry also makes an appearance, though disappointing. I’ll have more on that later.

Things kick off with the explosion which is caused by the monster sneaking onto the boat at the end of Mad Doctor of Blood Island. The only survivors are Bill and the monster, though no one knows that the creature survived. After the opening credits we see that Bill is returning to Blood Island because he thinks Dr. Lorca is still alive and is basically coming to kill him for all horrible things he has done. Obviously, he is proven correct, but things get complicated when he discovers the doctor has a new hidden camp and an army of hired thugs protecting him. With a lady reporter he just met, some locals, and the crew of the boat in tow he heads into the jungle for a showdown with Lorca who is again terrorizing everyone with his renewed experiments.

In my earlier reviews for the Blood Island series I mentioned that I had been warning people off from watching these for years and I was confused by that since I’ve been enjoying them so much this time around. Well I think it all makes sense now. I’m not going to say that Beast of Blood is a bad movie, but it certainly isn’t very good either. After having watched the first two I have an idea, or expectations if you will, of what I’m going to get. That would be monsters and blood. Pretty simple stuff if you think about it. Most of this flick is spent with our protagonist, Bill, fighting the henchmen of Dr. Lorca. In fact, other than the two or three minutes before the opening credits where they establish the monster caused the boat explosion the they never share the screen together! 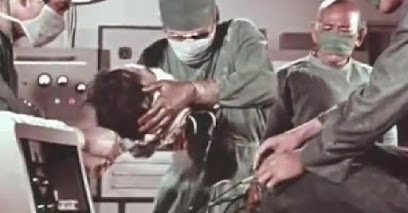 Think about what I just said. Beast of Blood basically doesn’t feature the beast. That is kind of disappointing, especially after seeing all the mayhem and fun from the previous installments. It plays a lot more like the war movies that director Eddie Romero worked on in the fifties and early sixties. Again, I won’t say that is bad, but it isn’t what I was expecting when I popped the Blu-Ray in. I was disappointed after having just watched the previous installments. When we finally do see the monster, it spends all of its time in two pieces, one head in a jar and the body strapped to the table. Don’t let the cover art fool you as they never get back together. Forever apart… that is kind of sad if you think about it.

I had pointed out that the creature work had dropped in quality and quantity from Brides of Blood to Mad Doctor of Blood Island and sadly we get another drop here. As I’ve already mentioned we don’t see a lot of the creature, but when we do it actually looks worse than it did in Mad Doctor of Blood Island. All we get is a mask over an actors head and another actor in a jumpsuit. During the shoot-out at the end of the movie between the henchmen and Bill’s impromptu army there are some gnarly bullet hits with spurting blood, but that is about it. That was disappointing.

In the end I dug the first two but can’t bring myself to recommending this one. Though if like me you are a completest, I suppose you will feel obligated to get the conclusion that you didn’t know you needed at the end of Mad Doctor of Blood Island. Crap did I just sell more copies of Beast of Blood? Damn it! Oh well I’m sure there are much worse movies to spend your money on.

Posted by Gutmunchers Lives at 12:37 PM