I’ve been kicking around the idea of covering the exploitation/horror movies of the Philippines, especially those made in the late sixties and seventies. I even went as far as buying a couple box sets as well as tracking down a few other movies. I suppose it is time to actually get started and I couldn’t think of a better place to start then the first movie in the Blood Island series, Brides of Blood. 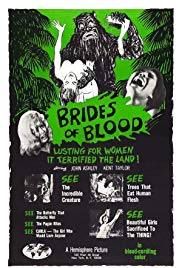 Things kick off on a boat as we are introduced to our main characters. We have Jim, a well-meaning Peace Core volunteer traveling to the remote island to help the locals with sanitation and irrigation. You know the real tree hugger crap they do. There is also Dr. Henderson and his much younger wife Carla. He is coming to do some research and she is basically just miserable. He has needs that her husband seems disinterested in helping her with. They arrive on the island and are met by the locals, including the lovely Alma who becomes Jim’s love interest. Also, there is a fellow American (though he is clearly not…) Esteban who lives in a big house near the village.

Not long after they realize that something is horribly wrong as they encounter mutated animals and plants. Yeah, the trees are trying to kill them! The worst of it is a particularly nasty monster to whom the villagers keep sacrificing lovely ladies. Why only the ladies? It seems that the monster has needs if you get my meaning. When they pick Alma that is the last straw for Jim, and he frees her and flees to Esteban’s home with her in tow. Along the way we find out that the island has been affected by radiation from the atomic bomb tests and that is why the local flora and fauna has become so homicidal. After one big twist involving the identity of the amorous monster we get to a satisfying conclusion to the movie, a big dance number. 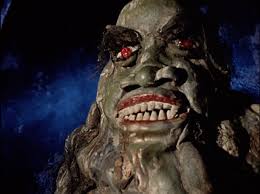 My recap of the movie makes it sound like I didn’t like it, or at least like I’m being snarky about it. The truth is this isn’t a great movie and has its fair share of flaws. That said I enjoyed the heck out of it. There is a certain cheesy fun to be had with a movie like Brides of Blood, or really any movie that was made for the drive-in crowd in general. That is if you do it right. For me you have to have a decent creature or at least an entertaining one. Here we get a big bug on visible wires, some tentacles springing forth from the trees, and of course the man in a rubber suit. For the late sixties and on such a small budget all of these are executed pretty well. My favorite creature related bit has to do with a tree trying to eat a kid! Yeah they went there. All in all I was satisfied with what I saw on screen.

Now this is going to sound creepy but, in my defense, it is a staple of the drive-in genre and that is nudity. We see a lot of skin in Brides of Blood. While it might seem tame by today’s standards (my how the internet has changed things) this was pushing the boundaries of the late sixties. It is likely that if these movies weren’t dismissed as trash, they wouldn’t have been able to get away with as much as they did. 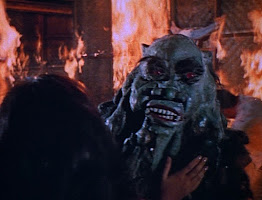 The cast is solid with Kent Taylor, Beverley Powers, and John Ashley all doing good work. Some of the local Filipino cast is good as well. Eva Darren as Alma does a great job and Mario Montenegro is good as Esteban. A lot of effort was put into trying to write the best script and get decent actors and it shows. The direction from Gerado de Leon and Eddie Romero is solid. That said the movie does drag a little bit here and there and the big dance scene tacked on at the end does nothing for the story and feels like padding, which they didn’t need.

My only other complaint with Brides of Blood is the music. While I don’t mind the soundtrack itself my issue is with how loud it gets. There are times where it drowns out what is on screen, not dialogue but just the ambient sounds of the jungle. It feels intrusive and took my attention away from the action on screen. This and the slow spots are the only real issues that I have with the movie.

For years I had warned people away from the Blood Island flicks based upon me watching them on VHS years ago. I’m not sure if it is the transfer on the new Blu-Ray set or if my tastes have changed but I feel like that was the wrong thing to do. Again, I can’t say Brides of Blood is a great movie, but I’ll be damned if it isn’t entertaining. Now I’m looking forward to checking out the rest of them to see if they are also better than I remembered. Consider this a recommendation.