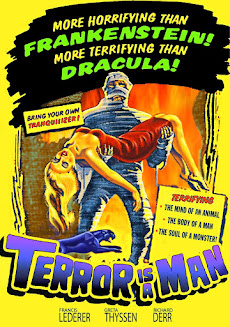 Before I go any further I should note that this is an early movie and doesn’t technically fall into what I had intended to cover. Though while it predates the sixties and seventies Terror is a Man is sort of an unofficial prequel to the Blood Island movies I just finished covering. This was a one-off horror picture made by directors Gerardo de Leon and Eddie Romero. Ironically, they couldn’t get it released for years and when they did finally get it out in the US its success inspired the Blood Island flicks. With that connection in mind I thought I’d take a look at it. Now with that bit of history behind us lets dive in.

The movie kicks off with a man, Fitzgerald, washing up on a beach after being shipwrecked. He is found a Dr. Girard and his assistant. They take him to the doctor’s house to recover from his injuries. When he wakes, he not only meets the doctor but his lovely wife, Frances, as well. Why is Girard on the isolated island? Well it pretty clear that he is a mad scientist of sorts having created a process to give human intelligence to animals. That might explain why a half man half panther has chased all the locals off of the island! Toss in a subplot with Fitzgerald making passes at Frances and you have the makings of a decent monster movie.

Terror is a Man is a very good movie. It is an odd combination of the Island of Dr. Moreau and Frankenstein. The idea of monster being part human and part animal clearly is a reference to the Moreau story, which has been filmed several times. Keep that in mind as we will be talking about it again in this review series. The stranger being shipwrecked, the love interest in the household, it is all very familiar. I’m okay with this because it is done very well. The actor playing Girard brings a misguided and most importantly sympathetic angle to his performance. What he is doing is terrible, but he isn’t being evil about it. That was interesting and showed some thought in the plot and character development.

We also get a bit of Frankenstein as well. Dr. Girard has an Igor like assistant who has hatred for his creation. This leads to him beating him with a wooden stake and generally being cruel. In spite of all the killing that the monster does when released you sort of feel bad for it. It still is part panther, which is a predator. Toss in the beatings to twist up it’s growing intelligence and you can’t really blame it for what eventually happens. Hell at the end of the movie it is trying to save Frances, the only person that has shown it compassion. Even the monster has some depth to it, which is very Karloff like. 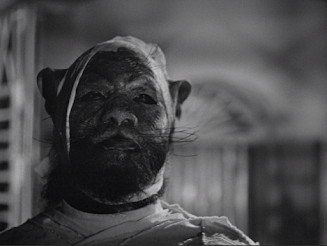 Clearly, I like the story and the time spent developing both it and the characters. But this is at its core a creature feature, so I’d be remiss if I didn’t talk about the special effects work and creature design. First up there is a very effective bit where they use a shaved pig (I’m thinking and hoping it was already dead) to emulate them cutting into flesh as they do surgery on the monster. This is in your face and really graphic for the ‘50s. You weren’t seeing anything like this in the movie made in America at this point. I got a real kick out of it. I also think that the creature design was extremely good. The panther mask looks fantastic and even allows the actor underneath to emote a bit, though mostly with his eyes.

In the end I found Terror is a Man to be an unexpected treat. If you have spent any time here at Crappy Movie Reviews you know that I’m a huge nerd of all things fifties horror and sci-fi. I grew up watching this stuff in the seventies on my local hosted late-night movie shows. Since then I’ve spent much time tracking them down on VHS, DVD, and finally Blu-Ray. Finding one that has slipped by me is very rare. The fact that this was my first viewing and that it is so damn good gives me hope that I have more hiding out there waiting for me to find. I highly recommend this movie and can’t wait to see what else the Filipino film industry has to offer.

Posted by Gutmunchers Lives at 4:06 PM