I was browsing the shelves of my local big box department store and a DVD caught my eye. Trailer Park Shark called out to me saying, “you know I’m a shitty movie, but you have to buy me.” I did my best to resist but then I saw that Tara Reid was in it. Still I resisted. Then I saw Dennis Haskins name on the box and read the synopsis. Mr. Belding from Saved by the Bell is the bad guy! Yeah, I bought the damn movie and a six pack of beer. What else am I going to do with my Saturday night? 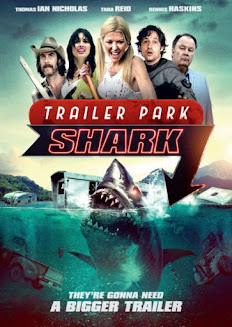 The residents of a trailer park are trying to hook into a new windmill to steal electricity, so they can be off the grid and save some money. While this is happening the levee/damn is blown up and the trailer park gets flooded. The movie then rewinds to introduce us to the characters and give some background before returning to the action. When the flood happens, a shark is dragged in and starts eating everyone. Our hero, a guy named Rob, uses the electrical wire and shocks the shark to death… or does he? The shark absorbs the juice and uses it later to zap its victims.

While this is happening we also find out that the evil Deconnard, Haskins’ character, sent his minions to flood the park so he could claim the land and develop it to make some serious money. But Rob saw them so now they must return to the flooded park to kill him and all of the other the witnesses! Sharks and a homicidal gang of bad guys. That can’t end well.

This is a terrible movie that I enjoyed the heck out of. The plot is completely absurd and is filled with characters that are cardboard cutout stereotypes of rednecks. But I think that is exactly what they were going for and if that is the case mission accomplished. The cast knows what kind of movie that they are in and are clearly enjoying themselves. Haskins especially is having a blast chewing up scenery getting to be the villain. We even get a funny extended cameo from Tara Reid of Sharknado fame sitting on a trailer dropping one liners with of course one of them referencing the Sharknado franchise.

Given that this movie couldn’t have had much of a budget the shark is brought to the screen with CGI. Particularly bad CGI that looks terrible. But for a movie named Trailer Park Shark that is what I would expect. In fact, I would have been annoyed if they “wasted” good special effects work on this movie. The kills are generic and there is a lot of CGI blood tossed at the screen. Again this normally a deal breaker for me, but here it fits so well I wasn’t annoyed too much.

Most of the time when a filmmaker sets out to make a “bad” movie they actually make one that is too terrible to watch. This one is enjoyably goofy and entertaining with a cast and crew that seems to be in on the joke. I found myself laughing and smiling from opening scene to end credits. Not to be taken seriously Trailer Park Shark is a good time if you sit down with the right expectations. Plus, the dog lives! If the dog lives in your movie then I immediately give you a thumbs up.

Posted by Gutmunchers Lives at 1:32 PM