The trailer for this one caught my eye online. It looks like a fun shark flick and since I’m a big fan of the original Deep Blue Sea I was excited. I think that I skipped the first sequel or at least can’t remember it. I can tell you after watching this one that it is okay to jump into this movie without having seen the first two. In other words, this isn’t a franchise that has a continuing narrative for you to follow… just a lot of hungry sharks! Now onto the review. 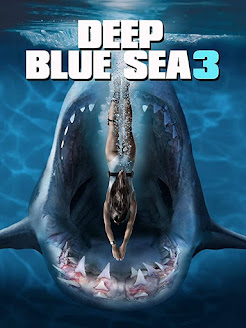 The movie kicks off with some do-gooders shooting some footage at a fishing village that has been mostly abandoned because of climate change. After some chatter about biodiversity and ecosystems there is an encounter with a great white shark where the researcher is bumped. The divers surface and we are introduced Emma and her team. They are studying a local shark nursery and how it is being affected by the global warming. It isn’t long before a fancy corporate owned ship shows up chasing some bull sharks that they claim are a danger to the nursery. On the ship is an old colleague and ex-boyfriend of Emma named Richard. He is also a marine biologist and is leading the team trying to catch the bull sharks.

Now if you have ever seen a Deep Blue Sea movie you know that the corporate guys are up to no good. The sharks they are chasing have been modified and are not only aggressive but also super intelligent. Yeah, they basically gave an apex predator the ability to figure out what we are doing and set traps for us. That seems like a terrible idea. The bad guys do what they do, lots of people end up as chum/supper, and we have an epic final showdown between Emma and the last shark.

I’ve mentioned in reviews before that I don’t mind a formulaic movie if it is executed well. Deep Blue Sea 3 knows what the formula is and adheres to it religiously. The jump scares come when you expect them, the bad guys go from jerks to murder at the drop of a hat, the father figure ends up dead, and of course there is the ironic kill. That last one is more of a trait of this series. It isn’t a Deep Blue Sea movie unless someone says something prophetic right before ending up as lunch! While I saw everything coming the movie is fast paced and only lingers on the good stuff like the kills. Sure, there is a little bit of character development fleshed out in some dialogue, but this movie concentrates on the sharks and the damage that they do. The filmmakers know what the audience wants and gives it to us.

The special effects are fun. The sharks are mostly all CGI work, but it looks good, so I have no issues with it. We have a nice number of kills from the shark violence. The kills are creative and different, which is cool for a shark movie. Some of the highlights are an arm in a fishing net, a half a diver still being pulled by his sled, a head gets chomped, and the requisite profess your love before being yanked to your doom. My favorite kill has to be a snatched from mid air gag that was funny. I do really like the kills and the creatures in Deep Blue Sea 3.

I’m always down for a good shark movie. That said I must warn you all that I have low expectations for them. I want some fun and creative kills, a few jump scares, and characters that at a minimum I don’t hate. You might be surprised how many movies in the shark subgenre aren’t able to meet these standards. Deep Blue Sea 3 met them and because of that I had a good time. No one will ever consider this a classic movie, but it’s a fun watch. With that in mind I’m recommending it.