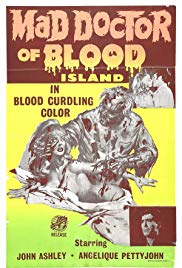 note: This review is part of a bigger series on the Blood Island trilogy which itself is part of my look at the Filipino horror and exploitation movies of the late sixties, seventies and eighties. While it isn’t necessary to read those, I would recommend starting at the beginning as I refer back to the other movies covered in my reviews. Click here for the full list of what I’ve covered.The Filipino movie review series continues with this second entry into the Blood Island series from directors Gerardo de Leon and Eddie Romero. Also returning is actor John Ashley, although he is playing an entirely different character this time around. I probably should mention that the Blood Island movies don’t have a narrative that continues between them but are mostly similar in tone and those returning in front of and behind the camera. Now with that out of the way lets dive in.

The movie kicks off with a naked girl running away from a monster chasing her. Not the same one as from before, but a different one. She is presumably killed and then we are introduced to our main cast. Ashley plays a doctor, Bill Foster, come to the island to investigate the rumors of a new disease. There is a beautiful young woman, Sheila, come looking for her long absent father. He is the islands drunk, though he sobers up pretty quickly. There is also a local, Carlos, who has come to visit his mother with I think the intention of taking her back to the mainland with him. Now that the characters are established let’s talk about the plot.

The previous entry, Brides of Blood, had radiation mutating people and causing all the mayhem. Mad Doctor of Blood Island switches this up a bit with the mad scientist twist of having Dr. Lorca experimenting on his patients. The title makes more sense now doesn’t it? He is using chlorophyll to extend life and help heal people, though it turns their blood green and makes them homicidal. Well I guess you have to break a few eggs to make an omelet. There are also some twists as to the identity of the monster, much like the earlier Brides of Blood, as well as at least once character that isn’t who you think they are. For what is an otherwise cheesy drive-in movie this one has a surprisingly interesting story that I don’t want to ruin here, thus the slightly vague recap. Much craziness, murder, and blood splattering occur before the end credits roll. 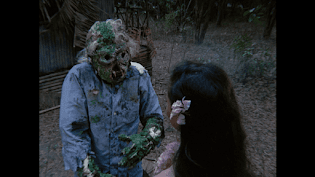 From a pacing and plot perspective Mad Doctor of Blood Island is a marked improvement over Brides of Blood. Characters are introduced and tossed right into the action without the movie ever dragging. There is always something interesting going on and even the dance number, yes we get another one, is shorter and plays better as it is cut into the middle of the movie. It doesn’t feel like it was tacked on to pad the running time. We do have a silly bit at the beginning talking about green blood and asking the audience to take a pledge of sorts to protect themselves. While not necessary it has a distinct goofy and fun vibe much like the shenanigans William Castle did in the fifties that added to my enjoyment of the movie.

The plot is much more straightforward but has at least one twist that I didn’t expect. Again, I don’t want to give anything away, but I will clue you in that it has to do with Carlos and his history with Blood Island. Even Dr. Lorca is initially played as a decent guy, though it is pretty clear he is the Mad Doctor, so I don’t feel like revealing him as the bad guy is much of a spoiler. Still I appreciate the efforts they went to not immediately reveal this. I’m not saying that Mad Doctor of Blood Island is a classic but compared to other flicks in this genre it has a decent story and script.

There is a bit of a drop off in the gore and creature design. Here we get a lot more green paint and a few appliances glued to a couple of actors rather than the full rubber creature suite from Brides. There is a decent kill scene here and there with the highlight being one woman getting torn up on screen by the creature, but it doesn’t match the sheer volume of rubber limbs and God help us tree tentacles from the earlier Blood film. This was disappointing but didn’t ruin the movie for me. What almost did was the decision to use this annoying zooming in and out on the scenes when the monster was near. It doesn’t matter if it was a close up of the actor or the creature the shot zooms in and out rapidly. So much so that I almost got nauseous a couple of times. It isn’t found footage camerawork bad, but it got close a couple of times.

Despite these last two criticisms of Mad Doctor of Blood Island I still found myself really liking it. I find a certain charm in old drive-in movies that I just don’t get from anything else. When you also toss in a story that I enjoyed and gives a few unexpected twists then I think you are onto something. Consider this one recommended.

Posted by Gutmunchers Lives at 10:51 AM