There are a lot of shark movies out there. Some good, some bad, and some just mediocre. Still I just can’t help myself. I think it is a sickness… 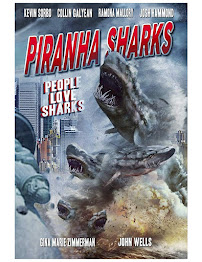 This is a simple story that we have all seen before. Random big corporation decides that the weaponized genetically engineered Piranha Sharks they couldn’t control well enough for a military application would make an excellent holiday gift idea! Really this is what they do when the little buggers break out and eat one of the scientists from the inside out. They think they can control the growth and make them pretty much harmless, but they can’t. Before you can say corporate greed the first batch of them are in the water system and taking over NYC. It is up to a couple exterminators and a slacker to save the day.

This is another of those movies that I had to watch after hearing the title. Most of the time that goes horribly wrong, but here it wasn’t so bad. First, I should point out that the movie is being played for laughs. From the Hallmark Christmas movie looking opening credits to Kevin Sorbo playing the mayor who doesn’t like to wear pants this is absurdly silly from start to finish. Piranha Sharks gave me just about everything that I expected. In addition to what I’ve already mentioned there is a bit with a sick dude getting killed on the toilette, random stripper girl dying in the bathtub, and an attack at a bar where the little sharks are swimming unnoticed in the drinks. If that isn’t enough to interest you there is an odd infomercial shown in the movie for the Piranha Sharks where former baseball player Jose Canseco professes his love for them! This movie is just plain weird. 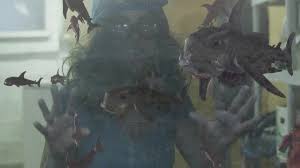 The special effects are CGI. All of it is terrible and looks goofy as hell. The piranha sharks remind me of monsters from a bad PlayStation game and I’m talking the old school original with the blocky graphics. We get some CGI blood, but the kills are all tame and dumb. They even take the time to put a CGI helicopter in when they could have totally skipped that scene. Normally this would bug the hell out of me. Here this level of incompetence in digital effects feels right. It just fits with the rest of the movie and is sort of what I would have expected. In some weird way better effects might have ruined the laughs, which again is what this movie is aiming for.

The best part about the movie is the cast. Everyone is having fun with their roles and not taking themselves too seriously. Our three main leads, the exterminators, have some decent chemistry and are very funny. The writing is decent and pokes some fun at the tropes of the genre with gags like the piranha sharks suddenly learning how to fly which leads to the line, “Flying Air Breathing Piranha Sharks. I didn’t see that coming.” I felt like they were purposely poking fun at the genre, and it works.

This isn’t a good movie. I can’t even say that it is that funny. But I didn’t hate it and found myself laughing in some spots. Piranha Sharks is one of those silly flicks that you watch once and likely never think about again. Not sure if that is a glowing endorsement of Piranha Sharks but it is the best I can do. I found this one Amazon Prime and watched it for free. That seems about the right price.