This is another author that was recently recommended to me. I decided to pick up this book to start things off since it was the first in a trilogy that was supposed to be one of Wright’s best. Plus, I was in the mood for a good ghost story and I think I got one.

Our main character is Abner Cray, a photographer hired to do a picture book about NYC. His friend Art is going out of town and offers his apartment to Abner to save him some money. But when he arrives at the place he finds a beautiful woman who claims to be Art’s girlfriend staying there as well. That seems odd to everyone including Art because his girlfriend Phyllis is dead! Yeah Abner’s new roommate is a ghost, but that doesn’t stop him from falling in love with her. But it isn’t just her that Abner is seeing, but all of the dead that haven’t moved on yet start to interact with him. Things get a little crazy after that. 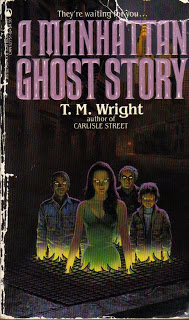 I think that I really liked this book. The story is interesting and different. I was expecting a traditional ghost story but that isn’t at all what I got. Here Wright creates a world where ghosts are here in our world until they “fall apart” and move on. Some of them seem to attach themselves to people, like Phyllis does to Abner so they have something to hold onto. She basically uses him as an anchor to our world so that she doesn’t have to go. When she does start to fade Abner, who is now in love with her, goes looking. Along the way he meets even more of the dead and more that can see them. He learns some things about how this new world works, but also ends up more confused by the answers he gets. Eventually he finds Phyllis but as someone who he met earlier warned him he may not like what he finds.

It is never explained why some of the ghosts are so determined to stay while others aren’t. There is something hinted at that they might have unfinished business. In the case of Phyllis, we find out that she was killed by Art, who eventually is made to pay for his crimes. So that might be why she is sticking around. But then again, she has nothing to do with his punishment so maybe not. It is also possible that she is somehow leeching off of Abner, who goes thru some mental and emotional exhaustion looking for her and more so after they are back together. I get the distinct impression that he is getting ready to leave her at the end of the book. But the ending is sort of vague which I liked. Wright clearly doesn’t feel the need to give you a neatly wrapped up ending and that is a good fit for the tone of the rest of the book.

I think I might be a fan of T.M. Wright and will be looking for the next entry into this series. If you get the chance to pick up a copy of A Manhattan Ghost Story I’d recommend that you do. It is an excellent read.