Another Wednesday and another book review here at the Horror Dude Blog and this one is probably the biggest book I’ve ever reviewed, at least for the blog. I think that we have all seen the movie Jaws, I certainly have. But I’ve never read the book. In fact, I’ve never read Peter Benchley at all. Since he was responsible for the nature run amok craze of the seventies and eighties that I love so much it was time to dive in. No better place to start than Jaws.

The little town of Amity survives on the out of towners that come to rent houses on the beach and spend their money at the stores. Right as the season is going to start a young woman is killed and her partially eaten body discovered on the beach. Sheriff Martin Brody wants to close it down after the coroner determines it was a shark attack. But the town doesn’t want the bad publicity and forces him to bury the news. But then the shark decides to take a few more people and Brody acts, though with a lot of guilt. After many unsuccessful attempts Brody, marine biologist Hooper, and fisherman Quint finally come face to face and do battle with it. Well you know what happens… 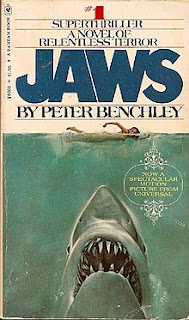 Or actually you don’t. The book is much different from the iconic movie that it spawned. You have probably heard the phrase “the book was better” but here it is reversed. Don’t misunderstand I think that this is a good novel and I read it in a couple of sittings which means I was engaged with the story. I can see why Universal bought the rights and turned it into a movie. But the movie does a much better job of realizing where the heart of the story is and focuses on the characters of Brody, Quint, and Hooper. In the book the three are kept apart until the third act. Quint only shows up for a couple of pages before they hire him to hunt the great white. Hooper is a more arrogant and in many ways despicable character. The only one of the three that seems to remain basically the same is Brody. I’m sure that years of watching the movie has influenced my opinions, but I noticed that Benchley worked on the screenplay so I’m thinking that given a second crack at the characters he made some much-needed changes.

Getting back to actually reviewing the book and not comparing it to the movie I’d say that I was satisfied and enjoyed it. The writing is tight and has no slow parts. The story makes sense and is easy to follow. I did find that it ended rather abruptly but has a cool final visual that stuck with me after I closed the back cover. I was left wondering about the subplot of the mayor being into debt with a mobster that was never resolved. This is what drove him into forcing Brody to keep the beaches open, but then he leaves town. End of story. It seemed odd and felt shoehorned in to explain the decision to keep things running even after the bodies start to pile up. I wish that we had some sort of resolution. But these are small issues and overall this is a quick and fun read.

I recommend picking up a copy of Jaws and checking it out. It is a classic that I’m glad I finally got around to reading.