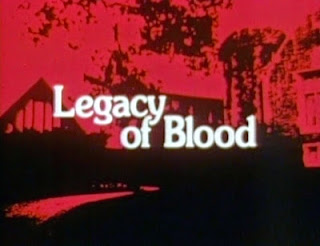 This little drive-in flick was one that I had forgotten about until I heard another reviewer talking about it. That inspired me to track down my own copy. I couldn’t find the thing anywhere. I was sure it was on one of those Millcreek sets. Luckily the internet provides, and I was able to find a copy to stream.

The story is simple and fun. Rich old guy, played by the always awesome John Carradine, dies and divvies up the money between his four children and three servants. He is a bit of a sadist and hates everyone, so he has a perfect setup. A pool of money is set aside for the servants and over a hundred thirty million is split between his kids. To collect it all they need to do is spend the week in the house. If any of them should leave or die their share gets split between the rest. That is a recipe for murder and mayhem.

Sure enough the old guy knows his family. Starting with a dog (damn it movies stop murdering dogs!) the killing gets rolling on the first night. In fact, the whole movie takes place that first night. The family can’t make it twenty-four hours before the murdering begins and considering this motley crew that isn’t surprising. Makes me thing that maybe the old guy had a point? The rest of the movie are the bodies piling up and as a result the suspect list shrinking. By the end credits all is revealed, and one final bit of fun is tossed to the audience.

So much of what makes a movie a good drive-in flick is here. The veteran actor, Carradine, was clearly on set for a day or so as he is hardly in the movie. It is done really well so I consider this a bonus and it is fun to see how they cut him into scenes. There is also a bit of sleaze with one set of the siblings having a relationship that is clearly not appropriate. Can’t have a fun murder mystery without a bit of incest, am I right? The acting is okay with some intentionally over the top work coming from Richard Davalos as the tortured sister loving brother Johnny! Dude screams his dialogue for most of the movie. It was also cool to see Faith Domergue who was in a lot of classic fifties movies getting some work towards the end of her career. This and the equally fun The House of Seven Corpses were nice ways to end a film career.

The kills are pretty tame and, in some instances, played for laughs. Sure, you get the straightforward death by gunshot and poison, but they also toss in bees and boobytrapped lamps. This isn’t the kind of movie that you watch for gore and scares. It is almost a comedy without trying outright to be one. I also have to say something spoiler free about the ending. We get a couple different twists and a really amusing last line right before the credits roll. Even if you aren’t having fun trust me you will want to stick around to the end.

Will to Die is a strange movie to explain and categorize. I can’t say that it is a good movie, but it hits all of those must have bullet points for a decent one. The most important of those was that I never was bored. Silly as it might be at times there was always something on screen to hold my interest. I’m going to recommend that if you can track down a copy that you should check it out.

note: I couldn't find the trailer to link above but I did find the entire movie! No reason not to watch it now.