I’m back with another independent zombie movie. I remember watching and not liking this one at all when I first caught it back when it was first released on DVD. But I’ve been cleaning out my storage locker so I thought I should check it out to see whether or not I should rehome it or keep it in my collection. Spoiler… I can’t wait to be rid of it! I’m going to give you the plot, at least what there is of it, quickly. We are introduced to some teenagers. One group goes to a concert in the city, the other attends a house party. Some zombies show up earlier in the day, but that doesn’t seem to put a damper on their plans. Then a bunch of zombies show up and start eating people, which does get their attention. The run around a lot, both the kids and the zombies (damn I hate that!) until almost everyone is dead. Along the way we get characters that drop in out of nowhere and a silly plot about government experiments and undercover agents. That about sums it up.

This movie ties into a couple of the things that I keep harping on here at Crappy Movie Reviews. If you have read my reviews, you might remember where I keep mentioning that I end up watching a lot of terrible independent zombie movies on the hope of seeing a good one. Automaton Transfusion is one of those punishments that I must take while looking for something worthwhile.

If you have read my reviews of independent movies you will also remember my motto that a low budget doesn’t prevent you from writing a cohesive script that takes into account your resources and locations. The story with Automaton Transfusion is quite the mess. First how is it that the characters don’t seem all that concerned that one of their classmates “zombies out” and tries to eat a teacher? Seriously they don’t even discuss it and head off to their planned evening activities. I get kids are stupid, but not that stupid! Other than this huge plot hole it was also apparent that they had no idea how to transition from one location to the next. The group of guys that went to the concert suddenly show up at the door to the party to save the one girl left without explanation or even an establishing shot of them arriving.

We also have three separate instances of random characters either showing up to die or worse give the speech to explain why things are happening.  There is the random guy in the shed and the bartender who exist to die horribly, possibly to pad out the effect shots. And then the janitor/army secret agent who explains the movie’s plot and then provides them with the McGuffin that drives the rest of the story. You can do this sort of thing, but don’t be so obvious about it and work a little bit harder to explain why they are there. Finally, we get the biggest screw you ending that I’ve seen in quite a while. It is pretty clear that they didn’t have an ending, so they just slapped a … to be continued… card when they arrived at the needed runtime. I can assume after all these years it isn’t going to happen. Thank God. 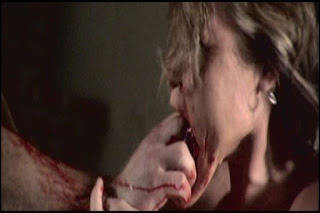 The plot isn’t the only thing that annoyed me about Automaton Transfusion. The absolute worst thing about the movie is the terrible camera work. Not only does it appear that this movie was shot on consumer grade equipment, but they don’t know how to shoot a movie. Every action scene is ruined by some terrible shaky cam that you will ever see. It is impossible to follow the action or know who is doing what due to it. But it isn’t just the action that is mangled. Instead of shooting inserts as character are talking to one another the damn camera keeps swinging back and forth to catch their lines. You are shooting on digital would it have killed you to shoot a few more takes? I felt like I was going to need some Dramamine before it was all over. Thankfully the movie is only seventy-five minutes long, though that felt like forever.

I will give Automaton Transfusion some credit when it comes to the special effects. The zombies are all generic and this is one of the few movies in the genre that lacks a featured flesh eater. But we do get some gore that given the lack of quality overall is strangely done with some passable practical effects. Throats are ripped, limbs torn off, and heads smashed. The best kill is a jaw getting ripped off a girl’s face. The funniest thing you will see is a fetus getting ripped out of a pregnant woman and getting chowed down on by a zombie. I suppose that shouldn’t be funny. Then again, I watch a ton of independent zombie movies, so I’m probably irreparably damaged by now. Again, I would have expected this to be some shitty digital work considering what the rest of the movie was, but I’ll be damned if we don’t get a healthy dose of latex mayhem. Sadly, the lousy camerawork ruins a lot of the best gags by making them almost impossible to see and follow. Still I wanted to give the filmmakers some credit.

Okay I’ve said something nice now I can let you know that I don’t recommend this movie at all. There is nothing of value here and it is a total waste of seventy-five minutes. I’m sure that you can find a way better use of an evening than watching this mess. I would suggest watching paint dry or perhaps YouTube videos of nut shots. Trust me it’s way more entertaining.