The movie begins with Gabriel playing around with his new camera while talking to his girlfriend and his big brother Michael. Everything seems to be great and you can see that they really get along well. But then the action switches to sometime later. We find the brothers packing in a dark house while something horrible is clearly happening outside. That thing is zombies, though at times they seem to be more infected, but they call them zombies. Michael is killed, and Gabriel makes his way to the high school where he meets up with some seniors who are hiding in the library. They deal with zombies, high school shenanigans, an almost rape, and infection in their midst. Oh, and an infected nurse played by Juliet Landau who has a small but memorable role. 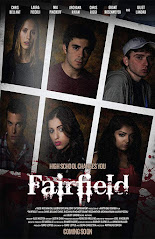 The first thing that I thought when the movie started was that I was in store for another found footage zombie flick. Thankfully while the camera plays an important role this is a traditionally shot movie. Not only that but they did an excellent job with the lighting and camerawork so that it is dark enough to be creepy but also is easy to see what is going on. It was nice to see that my first impression was going to be wrong and that I would be surprised by what I ended up with. That will become a common theme in this review.

The first part of the movie with Gabriel in his house and then traveling to the school is boring and looks cheap. This doesn’t look like the end of the world but instead like they shot in the early hours of a Sunday morning when no one would be around. I have issues with independent filmmakers trying to shoot stories that they don’t have the resources for. Write the script and tailor the story to fit what you can afford to shoot. To do otherwise dooms you to failure.

I was prepared to be disappointed by the rest of Fairfield but then Gabriel meets up with the other survivors and things get interesting. At first these characters seem to fit certain tropes that you would expect. The Jock, the pretty airhead girl, the nice girl, and the smart guy are all on display. But the writing takes them and turns them into actual people with issues and depth. Even the jock, who we all know is going to be trouble, has a vulnerable side that when rebuffed sets off his rage. He is infected by then, but we know had anger issues before.

Fairfield is an interesting movie in that it isn’t about the zombies but is instead focuses on the kids trying to survive and deal with each other. Now there are zombies and they do chase them, and violence happens. However, that isn’t the point here and that is sort of cool. Now if you are looking for a lot of gore or nonstop action this isn’t the one you should watch. On the other hand, if like me you have watched too many low budget zombie movies trying and failing to be epic and instead want to see something more contained and different then I can recommend Fairfield to you. Just make sure you have the correct expectations and I think you will dig it.

Posted by Gutmunchers Lives at 3:57 PM