Some people like shitty movies and some people don’t. If you haven’t realized it yet, please let me clue you in on the fact that I am one of the former. I just can’t help myself and am a sucker for the movies from the Asylum. They can be poorly made, have an absurd premise, but as long as they aren’t boring, I’m in. So where does Zoombies 2 fall? 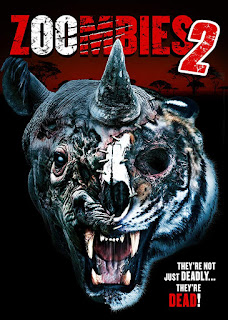 The action kicks off with some poachers sneaking into an animal sanctuary for some easy scores. One of them, Jezel, has developed a new drug to knock the critters out. Putting holes in the skin is bad for business you see. This has the unintended side effect of causing the animals to become zombies, though later it feels more like they are infected. Regardless this spreads throughout the sanctuary infecting other animals. All of them craze human flesh. Why? Well Jezel engineered it so that the drug wouldn’t affect human beings. Because of Science stuff that means the only cure is human beings and eating their flesh. That seems like poor planning.

This is a stupid movie. I think that we all knew that the minute the poster was teased online. The plot is simple, linear, and has that been there done that feel to it. Of course, the group splits up and some of them get stranded outside with the animals. And yes, they have to walk back to the facility Jurassic Park style. Really folks there is nothing new here at all. Within ten seconds I could have and actually did predict who was going to survive till the end. But not everything has to be clever or artistic. Sometimes you can just make it fun. I thought Zoombies 2 was fun.

Why do I say that? Let me give you a couple examples. First there are the cutesy meerkats that go all zombie and chew on some poachers. This includes leaping from nowhere to rip up some faces as well as eating a dude’s fingers off. Don’t get too excited because the gore is all digital, but it still made me laugh. The other example borders way more on the WTF side of the equation and involves a crocodile that apparently sneaks thru the pipes and bursts out of a toilet. Please don’t try and overthink that one as it makes no sense. Again though, it made me laugh.

We get a ton of CGI zombie animals. They look like crap but are sort of amusing. There are lions, rhinos, crocodiles, and hippos. But my favorite are the zombie porcupines that can now toss quills like deadly weapons. These animals keep attacking and killing off the humans who are basically continually doing stupid things. I kind of had fun rooting for the zombie animals, which I’m thinking is the point.

I’m going to say it again. Zoombies 2 is a shitty movie. It is also one that I got a kick out of. While I don’t feel the need to ever watch this again if they make Zoombies 3 I’ll be there. I mean since Zoombies 2 is basically a prequel to the first in the series we really should see a proper sequel to wrap the story up. Right? I probably shouldn’t recommend this movie, but I’m going to. Consider yourself warned and let me know if you do watch it what you think.