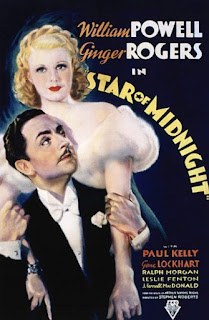 Time to dive back into the thirties for some more fun. This time around William Powell plays Clay Dalzell and Ginger Rogers is his beautiful sidekick Donna. She is a flighty girl, and he is a successful lawyer who gets caught up getting some embarrassing letters back for Donna. Or so he thinks as she made him think it was for her but was in fact for a friend. While getting them Clay crosses paths with a gangster who becomes helpful later when they get wrapped up in another case.

There is another plot revolving around a missing woman and a mysterious actress who disappears during a performance of her hit show Midnight. See how the title ties in? A reporter shows up at Clay’s apartment to share information and is promptly shot and killed. This gets Clay on the case to figure out the who and why. More importantly how does it all connect to the missing woman and yet another of his friends who is involved somehow. Toss in a few more characters as suspects and you have the plot of Star of Midnight.

This is an interesting twist on a murder mystery. Here most of the story revolves around them not so much figuring out who the killer is, but instead unraveling the motives and how the missing woman ties into it. Her character is key to the story, but in another interesting twist she never appears on screen. When we do eventually see the how and why it all makes sense. We also get some clues along the way and the movie does a good job not hiding anything important from the audience. Getting to solve the case along with the characters is a big part of the fun. And I can say that Star of Midnight is a lot of fun. 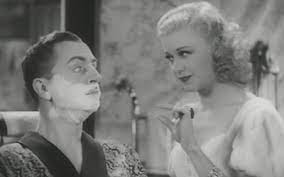 This was a first-time watch for me. I’m a big fan of Powell in the Thin Man movies and this was made after the success of the first movie. While there are a lot of similarities, we do get an obvious difference. Here he plays the character as less intoxicated and just a bit more serious. Basically, there is less comic relief. The onscreen chemistry between him and Rogers helps to carry the story along as the dialogue is snappy and they seem to like each other. Though if I’m completely honest the magic between Powell and his Thin Man co-star Myrna Loy is much better. The rest of the cast is solid and features a lot of character actors from early Hollywood.

Some of the older movies that I’m going to cover in this marathon are going to be harder for a modern audience to watch. Many times, those movies play out more like the stage play that they were inspired and influenced by. That means a static camera, characters entering the frame, and little to no sound beyond the dialogue. Star of Midnight doesn’t suffer from those deficiencies as it was a big studio movie and they had already started fixing those issues. I’m pointing this out because I’m going to recommend this movie and don’t want anyone scared off by some of the others that I’ve also recommended but that might have been turned off by these issues. This movie is very accessible to a modern audience and what they expect to see. Check this one out.