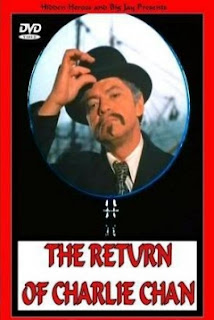 I grew up watching the Charlie Chan movies from the thirties and forties. I understand that there are some issues with them, and I do plan on covering them for the site here. When I do, I’ll talk about the problems with having a white actor play an Asian character in those films. But for now, I just want to chat about this made for television revival that went nowhere. I had been looking for a copy for years and was finally able to track it down.

Things open on the yacht of a Greek tycoon. The boat is packed with guests and family, but when someone takes a shot at him things take a serious turn. Not sure who tried to kill him or if he was even the target one of the guests, a writer, suggests that they try and get his old friend Charlie Chan out of retirement to solve the mystery. We then find out that he has retired to a pineapple plantation with his extended family and while he insists he has no interest in solving crimes anymore it is clear that he can’t help himself.

Soon our detective finds himself embroiled in murder, someone finally does get killed, and blackmail. His task is further complicated by the fact that the man he was brought to help becomes more and more hostile towards him. Though in the end all is resolved and the guilty are brought to justice.

Well crap… I can see why this never got picked up. Before getting to the movie itself I should point out the obvious. By the time the early seventies rolled around casting a white actor to play Chan just wasn’t going to fly. And yes, I know they tried to do it with Peter Ustinov eight years later, but it just wasn’t okay, not that it ever was. It is interesting that this made for television movie premiered on British television in seventy-three but took six years to be broadcast in America. I couldn’t find out a reason why for sure but I’m thinking someone looked at it and realized this was a mistake.

Ross Martin, of Wild Wild West fame, had already had a reputation for costumes and disguises from that show so I see the appeal. But is performance is uneven as he seems to go back and forth between playing the character with the classic speech patterns and ancient Chinese proverbs while at other times seemingly trying to tone that down. I would have been happier if he chose one and stuck with it, but it noticeably bounces between them. This killed, pun not intended, any chance that the movie had to build momentum. Though I will say that seeing Leslie Nielsen doing his best Greek accent as the tycoon Hadrachi was a bit of fun. 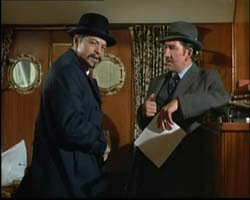 Now to the core of my issue with The Return of Charlie Chan. This is a mystery and the one cardinal rule a movie like this is that the audience must have a chance to figure it out. Hiding the clues in plain sight and allowing us to guess at what is going on is key to making this genre work. Here the filmmakers totally fail the audience. Not only do we have so many characters that I wasn’t sure who was murdered right away, but we also aren’t given key information about what is going on. We have Chan on the phone getting information that we don’t have that is used to solve the crime in the obligatory “get all the suspects together” scene at the end. As a viewer not having any chance to put it together myself takes all the fun out of it.

I wanted to like this movie. Had I gotten a decent mystery it would have at least been enjoyable on some level. If you can’t tell yet I was disappointed with it and just can’t recommend this one. If you want to watch a Charlie Chan movie your best bet is to check out one of the old ones. They at least have a script that gives you clues to guess at the solution to the mystery.

Posted by Gutmunchers Lives at 6:49 PM