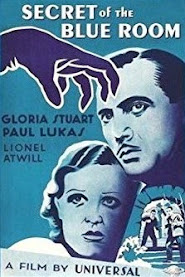 In the thirties there was an entire genre called “Old Dark House” movies. They acquired their name appropriately enough from the first example titled The Old Dark House. The Secret of the Blue Room followed that movie a year later and starred the same lead actress, Gloria Stuart. To be one of these a movie had to feature a spooky setting, a storm or darkness, and some terrible legend that is either proven all too real or resolved. Secret passages, hidden doors, and a killer creeping around are also a big plus.

The Secret of the Blue Room features all of these. The story beings at the birthday supper of a young woman named Irene, Stuart’s character. Her father as well as three men vying for her affections are there with her. Since it is a creepy sort of night legends and ghost stories come up. It is then that we are informed of the castle’s legendary Blue Room. Twenty years earlier there were three unexplained deaths in that room and since then it has been locked up. Well guys being guys and since there is a pretty lady involved it is decided that each will take a turn spending the night in the Blue Room to show Irene how brave they are. Needless to say this doesn’t end well.

The first night Thomas disappears from the locked room. Despite that on the second night Frank decides to spend the night in the room. He is found shot to death and the gun disappears before the police arrive. Is the room cursed or is there a copycat murder? Where did the missing man go? Will the third suitor live thru the night? So many questions, but all are answered before the final credits roll.

I get that these older movies aren’t everyone’s cup of tea. The camera doesn’t move around as much as a modern audience is used to as these are staged more like a play then the modern sensibilities of filmmaking. That said this is one of the better early examples of horror movies. The movie is paced well clocking in at just over an hour long. It is fast paced and gets to the good stuff right away. The mystery itself is satisfying with the reveal coming as a surprise. One that I won’t ruin in this review. It checks all the boxes with the spooky castle, a hidden door, secret passageway, and the killer in the black coat lurking in the shadows. 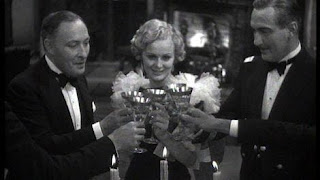 In addition to Gloria Stuart, who most people recognize as the old woman from Titanic, we also get Lionel Atwill who appeared in a lot of great Universal monster movies like Frankenstein meets the Wolfman and House of Dracula. Heck Stuart herself was in the previously mentioned The Old Dark House and The Invisible Man. The performances are a bit melodramatic, but that was the style in early Hollywood.

This was a first-time watch for me as I’ve somehow never caught this one before. I’m glad to have finally checked it out. In some ways, mostly the pacing, it is superior to The Old Dark house. I’m probably going to get in trouble for saying that, but it is how I feel. If you are looking for a spooky old time and have an hour to kill, check out The Secret of the Blue Room.