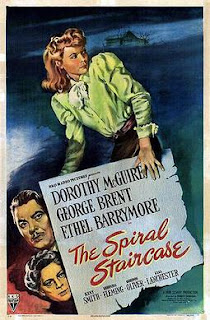 Thought I’d dig up another classic mystery movie to review here at the site. The Spiral Staircase is a perfect example of what I was looking for. The movie is set in the early part of the twentieth century in a small town. There is a killer on the loose who has been victimizing women, all of whom have some sort of affliction that cripples them in some way. Helen, a beautiful young woman, is a mute and is apparently the killer’s next target. As an added twist she works as a maid, and it quickly becomes clear that the killer is a member of the household. When a storm blows in Helen is stalked throughout the house, though she doesn’t realize it! But we as the audience do know she is in danger, which is a cool twist. Eventually the identity of the killer is revealed, and an unexpected hero comes to the rescue.

They just don’t make them like this anymore. The story takes it’s time to unravel and let us in on what is happening. Instead of a mystery with a detective that we follow thru it is left to the audience to sort things out. I really liked that. Right from the start where we see a mysterious figure lurking behind our first victim you know that we the audience are going to be a sort of participant in the movie. This helps to build an air of tension that keeps your focus on what his happening as well as rooting for Helen as a sympathetic character. I understand that this might not play well to a younger audience but honestly if you put your phone down and focus on what you are watching there are a lot of subtle things you will appreciate.

The performances are all solid. The best is from Dorothy McGuire as Helen. She has to carry the movie with her performance which is a tall order before you realize that she has to do so without any dialogue! Despite that she creates a sympathetic protagonist that you can and will root for. You don’t only get her thought as Elsa Lanchester, the Bride of Frankenstein, shows up in a supporting role as the household’s cook.

For me there is nothing spookier then a properly light and shot black and white movie. The Spiral Staircase does all of this very well. The use of the shadows with figures seeming to emerge and disappear into and out of scenes is amazing. This is accomplished with wonderful camera placement as well as minimal lighting. They also use some interesting tricks including showing the eyes of the killer and another bit where we get to see how he or she sees their victims. There is a shot where we see thru the killer’s eyes as they look at Helen seeing her face without a mouth.

There are some flaws with the movie. We get far too many suspects, many of whom are easy to dismiss. Plus there is a dead give away that you might notice when the killer is first introduced that could spoil the thing. But compared to the overall qualities of the movie these are minor and aren’t a deal breaker for me. I highly recommend checking out The Spiral Staircase. I know that it is frequently on cable, Turner Classic Movies I think, so set your DVR.