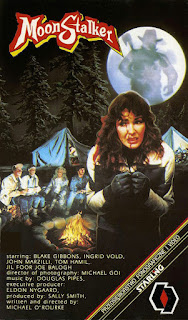 The movie opens with someone stalking a group of kids partying in the woods. A couple splits off for some alone time and he kills them with an axe, offscreen. Later we see a family camping in the winter, much to the dismay of the kids. The dad is tired of crowds and has figured that no one will bother them in the woods, in the middle of winter, in the freezing cold… sounds like a good plan. But then an old guy shows up dragging a raggedy camper behind his old car. He seems nice enough and they have a nice chat.

Since this is a horror flick you know something must be up. Turns out he has his crazy son in the camper whom he just broke out of the hospital. The kid’s name is Bernie, yeah the killer in Moonstalker is named Bernie! He kills the family for their microwave, but the daughter gets away. The older guy, Bernie’s dad, has a heart attack and dies. That leaves Bernie to tear thru a local camp filled with survivalist trainees. Bodies drop as the survivors finally figure out something is wrong. But will it be too late to stop things? Will anyone survive? Will Bernie drive away in a stolen cop car because none of the other cops notice he isn’t one of them? Maybe on that last one…

I hadn’t seen or even heard of Moonstalker before. Given that I’m a huge slasher movie fan and that I was haunting the aisles of the video store looking for them that worried me. Almost every time that I’ve discovered a slasher that I missed it has been awful. My expectations going into this one were very low, and I guess that was a good thing. The movie is paced okay and follows the formula closely. We get plenty of kills, more on that later, and a bit of nudity. The killer starts of really cool with a straitjacket and a mask, he apparently likes to bite people, but sadly ditches it early on for a cowboy hat and sunglasses. That was disappointing.

The filmmakers had obviously been “inspired” by Halloween when they made this. The music is a very simple keyboard score that sounds similar to what Carpenter did for his classic. We also even get a Dr. Loomis character in an old cop named Taylor. He is dismissed and stumbles around looking for the killer disheveled yelling a lot. Is any of this sound familiar? That said they don’t linger on it, so I didn’t mind it too much. Back to the kills. We get an impressive seventeen, but most of them occur offscreen. We do get a few limbs after the fact, but I was disappointed with the gore, or lack of it. We do get a couple of gags that I liked. There is an arm getting chopped off and an axe to the back that were executed well. Though the best kill is a knife to the forehead. That was a neat trick. All in all, for a slasher on a budget it isn’t terrible, just not great.

In the end I suppose that compared to the bottom of the barrel slasher flicks I’ve been covering in earlier marathons this isn’t too bad. I expected a boring by the numbers cash in and instead got a movie that clearly had some effort behind it. Sure, it follows the formula, but the filmmakers and cast are giving it their best shot. If you can track down a copy of Moonstalker it isn’t the worst thing you could watch. That would be the Camp Blood series.