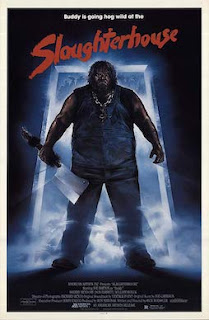 This is one of the slasher movies that I’ve been looking forward to covering in one of these marathons. Slaughterhouse is an old favorite from my days of haunting the horror section of the local rental shops. This is going to be fun.

The plot revolves around Lester Bacon and his son Buddy. They run a slaughterhouse that has been put out of business by the modern methods of butchering. When the movie starts off his former advisor Harold, a rival businessman, and the sheriff are all at his house trying to convince him to sell before they have to foreclose. He refuses and they give him thirty days to clear out. Well earlier Buddy had killed some kids who were messing with his pigs and when his dad finds the bodies, he decides to send Buddy after the men who are taking their farm.

The rest of the movie is Lester luring the men to the slaughterhouse for Buddy to kill along with the friends of the couple who were killed earlier showing up on a dare because it is a spooky night, and the dance was canceled on account of the power going out. We get a lot of running around, screaming, squealing, and predictable but fun twists until the final freeze frame before the end credits start.

Before I start, I need to be very clear. I know that Slaughterhouse isn’t a good movie, but I’ve always enjoyed it. Not every horror or slasher movie needs to be packed with scares or have a unique twist. Sometimes you can just give the audience a few laughs and some blood and that is okay. This movie lets us know from the start who the killer is and why he is killing. It also feels very much like the screenwriter, Rick Roessler, who was also the director had seen Texas Chainsaw Massacre. There are bones spread around the sets, the whole butchering and slaughterhouse angle, plus the large killer who never speaks but only grunts and squeals. I acknowledge all of this. But the movie is fun. 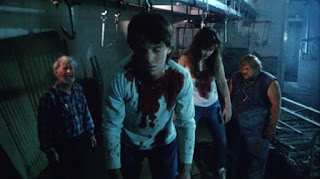 The movie is quickly paced and gets to the good stuff right away. There is either a silly character or Buddy killing people from start to finish. The characters are two dimensional but fill the needed roles with relish. The “you know he is going to die” deputy, the randy couple, the best friends to both the boyfriend and our final girl. They are all here and most of them end up exactly as you would expect. Though there is a neat twist at the end that most first-time viewers don’t expect. You don’t have to reinvent the wheel if you are able to execute things well enough to be entertaining.

The kills are great with a cleaver to the face, a hand off with some bleeding out, a crushed head, throat cut, some meat grinder action, and a spiked club to the face. There is a lot of face mayhem in this one and I approve. Though my favorite kill is near the end when a head ends up under the wheels of a car and we see it pop. Toss in a terribly executed ricochet off Buddy’s clever for some goofy fun.

Maybe it is nostalgia or perhaps I’ve just always had a soft spot for Slaughterhouse but I’m a Buddy Bacon fan.  If you are looking for a goofy slasher where you can just kick back with your beverage of choice and have a good time, then this is the one for you.

Posted by Gutmunchers Lives at 9:12 PM