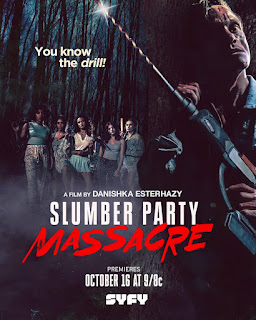 In case you didn’t notice the date, this review is for the remake that debuted on SyFy channel in October of last year. This is not only a remake, but I suppose a parody and/or updating of the franchise to reflect current views on gender roles. Yeah, I’m sort of worried already. Oh, and be warned there are some spoilers below. If you just want to see my final recommendation skip to the last paragraph.

The movie starts off in ninety-three as some girls are frolicking at an isolated cabin, drinking, eating pizza, and dancing… all in their pajamas. Hey this is a made for television flick so what did you expect? A jealous ex-boyfriend shows up and harasses then sneaks a peak thru the window. Then the killer shows up with his drill and starts to murder everyone. Well, there is one final girl who knocks him into the lake where everyone thinks he drowned.

Flash forward to today and we meet a new batch of girls, one of whom is the daughter of our survivor. They head out for a week at the lake and end up at a house across from the house where all the murders happened. What a coincidence! Except it isn’t because this was all planned by the girls to draw the killer out. Since they never found the body and more girls had disappeared, they assume that he is still alive. And sure enough that first night he shows up and comes after them. But there is a huge complication from a group of boys staying across the lake in the murder house. They are generally dumb, take their shirts off, have the dude equivalent of a pillow fight, and one of them gets naked to take a shower. Yeah, cool I see what they did there. Tack on a couple of twists and that’s the movie. 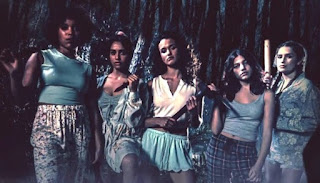 I have to say that the pacing of Slumber Party Massacre is decent. The flashback plays out like a bonus mini slasher flick and one that feels very old school in the way the characters are portrayed. I liked the idea that the mom is the only survivor, and her daughter is the one that goes after the killer. That was fun. I also thought the actresses throughout were great. They didn’t have a lot asked of them but clearly, they have talent. There are also some clever callbacks to the original with the giant drill being used as the weapon of choice as well as a subtly placed van that should look familiar. We even get a funny reference to the original’s sequel when a very familiar guitar shows up. These are all good things.

The movie is hamstrung by being made for basic cable. It can’t go where most slasher flicks go. The kills are rather tame and while occasionally fun you don’t see much. Much of the work is CGI and what little practical effects we see are basic and honestly not very good. There are a healthy twelve kills including the drill going thru necks, foreheads, and chests. There is also a nail gun to the eye, a skill saw thru the stomach, and some gouged out eyes. My favorite kill, not due to execution but because it is so creative, is a face getting peeled off by a wire getting stuck on the drill. Now all this stuff sounds great, but it is mostly seen after the fact or done onscreen with mediocre CGI. I just wasn’t digging it. 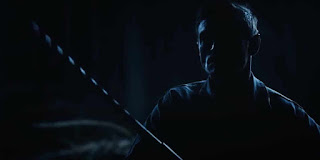 Now I’m going to show my age. I had always thought if there was a genre that would be safe from the woke crowd it would be slasher movies. At their core they are sleazy and sexist tales where girls get naked and killed in horrible ways. Yes, the guys die too but let’s be honest we watch for the nudity and murders that follow it. Not saying that is right or okay, but it is what it is. Here we have a flick that lets the guys get naked and do stupid stuff and the girls save the day. Though if you think about the classic slasher flicks it normally was the final girl that beat the killer so yeah… Regardless this wouldn’t have bothered me so much if they hadn’t been so damned obvious about it. One of the guys mentions his toxic masculinity right as he is about to do something foolhardy. Also, when given the chance the dude drives away leaving the girls to their fate. Basically, every male character is either cowardly, stupid, or the killer. I get they wanted to play with the formula but as much as critics want to make it out that all the female characters in old schools’ slashers were bimbos that isn’t the case. Again, most of the time they were the protagonists who overcome the killer or at least survive them. This feels less like flipping the script and more like sending a message.

This ruined Slumber Party Massacre for me. Though I’m thinking that this movie is made for the crowd that appreciates such things. If that is you then I’d say check it out. But for old school fans I think this is a hard pass.