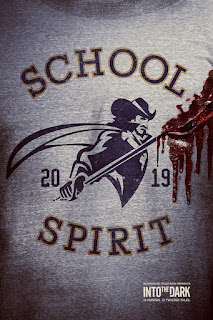 I found this movie on Hulu, and it looked like a newer slasher movie, so I thought I’d give it a chance. The story centers around a group of students in detention on a Saturday. The vice principal who is watching them is more concerned about drinking away his troubles then he is watching them. So, they get up to some shenanigans including smoking weed… or rather vaping it as well as drinking.

The fun is interrupted by the legendary ghostly mascot, a pirate, who starts to kill all the bad kids. Sadly, they have been locked in the school by the drunk in charge, so they are trapped with a killer. Who is the killer and why is this happening? I’m not going to spoil it here, though I had it figured out early on. But then I’m a jaded horror nerd and this one plays it by the book.

I think that I liked this movie. It is harmless and follows the traditional slasher tropes to the letter. You have the good kids, the bad kids, drugs are consumed, they are isolated without supervision. There is some intended hanky panky that never happens, but that is okay. It really is the thought that counts. While familiar the movie does a fantastic job keeping the action moving as there is never a single moment in the eighty-three-minute runtime that I was bored. It is also likely that someone who isn’t as familiar with this kind of movie isn’t going to pick up on who the killer is and may enjoy that as well. When we do get to the final reveal it is staged decently and makes sense. But my favorite part of School Spirit is the neat ending with the final girl. I can’t remember a slasher movie that has ever left me feeling like this one does. That is cool.

The cast is solid and filled with what I think are television actors. While young they have clearly had some experience in front of the camera. That is a huge deal as it is mostly left up to them to make the characters likeable and relatable. The special effects and kills are extremely tame. You get a decent sword to the gut and an offscreen beheading by paper cutter with the severed noggin dropping into a waste bin and that is about it.  Well, okay there are a couple of feet hacked off, but you just see them after the fact. More than a couple characters are killed completely offscreen without any explanation.

Here is where I think it is important to manage expectations. If I were to look at School Spirit thru the lens of the eighties I would be annoyed by the lack of gore and creative kills. But this is a very low budget Blumhouse Television production made for streaming. The fact that the cast and story are as good as they are and that the filmmakers do the best they can to make a movie that in many way reminds me of the good old days has me feeling like I should give them a pass on the disappointing kills and gore.

I think if you manage your expectations and understand what you are going to get then School Spirit is well worth your time. I doubt it will go onto anyone’s “watch every year” list, but it is a harmless and fun flick. I recommend you give it a chance.