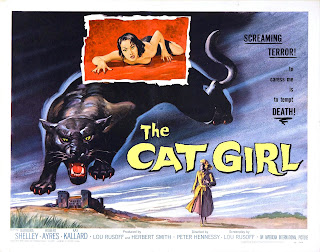 Lenora Johnson is returning to her family home to inherit some money and the estate. She brings her friends and new husband with her, so she doesn’t have to be alone. She has bad memories about the house which are proven to be correct when she is told by her uncle that it is time for the family curse to be passed to her. He is killed by a large leopard that then becomes the “other” part of her. She is of two minds, one human and the other animal. At first it isn’t clear what this curse means. But when she sees her husband cheating with her friend the anger boils over and the leopard kills him.

An old love of hers, Brian, is there to treat her as he is a psychiatrist. Eventually she is locked up in an asylum for treatment but gets “better”. In reality it is a ploy to be released so that she can win him back now that she is single. The big issue with that is Brian is already happily married so of course his wife has to go. This leads to the big finale where the leopard is stalking the alleys of the bad side of town as Brian races to save his wife. What happens? Lets just say that we find out what the consequences to the woman and leopard when their link is permanently severed!

I honestly expected a creature feature like Wasp Woman or The Fly with a person turning into a hybrid monster that terrorizes the rest of the cast. What I got was this melodramatic movie that leans more into the atmosphere then it does the horror. The story revolves around Lenora and her mental issues. For part of the movie, we aren’t even sure if this is a legit curse or if it is just a coincidence that people are dying around her. I mean there are only two deaths, that of her uncle and husband, both on an estate where a dangerous animal is running amok. It really doesn’t become clear until the action moves to the city, and she is clearly changed by her new dual personality/nature. We don’t even get a rubber suited critter but instead have footage of an actual leopard moving around the sets and when needed a stuffed version for the cast to interact with.

This is the second time in recent memory where I’ve run into a movie that was inspired by the Val Lewton classic Cat People. The other was the odd made for television flick The Cat Creature. I thought that was a cheesy fun flick but here it is different. This is a well-made movie that embraces what made Lewton’s movie so great. The sets are very gothic which is enhanced by some beautiful camerawork and lighting. This is a very pretty movie and shows an attention to detail that I hadn’t expected when I thought it was going to be a monster movie. The music adds to the atmosphere and the acting is solid. The pacing can be a bit slow if you were expecting a lot of creature action, but once I realized what we were getting I was able to switch gears and enjoy the overall creepy vibe that Cat Girl provides.

By no means should anyone think that this is as good as Cat People. But there is a lot of good things going for this one, as I stated above. I just wanted to make some connections so that you knew what you are getting yourself into. For this review I watched the British print which is slightly longer. I don’t know what might have been cut for U.S. release and if that would make any difference. I highly recommend checking out Cat Girl.