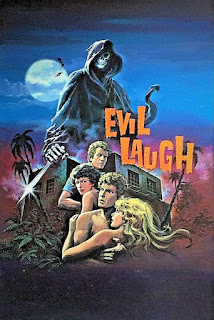 What is that sound? It is me scraping the bottom of the barrel for slasher movies. Yes my friends after five annual marathons I’m starting to run out of stuff to cover. But I continue to dig and this time around I have a movie for you that has sort of a pedigree. It was directed and produced by Dominic Brascia who is best known for trying to share a candy bar with an angry man cutting wood in Friday the 13th Part V. If that doesn’t get your attention the movie also stars Scott Baio’s brother Steven. Well, I did warn you…

The movie opens with a realtor getting a house ready for some prospective new buyers to check it out over a long weekend. There is also a delivery guy bringing groceries to stock up the pantry for them. This is important since both the first guest who arrives and the delivery guy are attacked by a mysterious figure in black. Later we find out that the house used to be a home for foster children and in the past a young man named Martin was accused by them of being a molester. He wasn’t but it didn’t end well as even after he was cleared, he returned to the house and killed all the kids!

There is your backstory and after we find that out the rest of the flick is the killer stalking and murdering the rest of the guests. Will they unravel the mystery and identify the killer? Will they even notice that someone is killing them? Do they realize that they have eaten the testicles from one of their murdered friends? These questions and others will be answered… sort of.

This isn’t a good movie at all. The pacing is a bit uneven with most of the kills backloaded into the second half of the movie. In fact, it is my understanding that the distributors made them go back and include the delivery guy getting killed just to even things out pacing wise. We also have a character that likes to talk about movies and compares their situation to different flicks like Ten Little Indians, Halloween, and Friday the 13th. A quick note to filmmakers. Don’t remind me of movies I’d much rather be watching then yours! To top everything off we get an inexplicably stupid ending that feels tacked on in a hope that they would maybe get some sequels. Thank goodness that didn’t happen.

The acting is wooden, the dialogue stilted, and the plot a bit silly. Steven Baio is no Don Swayze and lacks the charisma to carry a movie. We get some of the worst generic eighties music in what is a very bad soundtrack. The go to song that gets played again and again is annoying. The gore is bad, even for the late eighties when the genre had been neutered. Most of the onscreen kills are simple stabbings with blood trickling out of mouths. We do get an axe to a noggin’ which is fun and the kill that most fans remember from this one, death by microwave! But other than that, the kills are utterly forgettable.

To be fair I’ve seen much worse attempts at slasher movies. If you had to choose between this and something like the Camp Blood movies, then obviously you choose Evil Laugh. And I suppose if you are a slasher movie nerd like me you need to check out the microwave kill. But there isn’t much more to recommend this one.

Posted by Gutmunchers Lives at 3:49 PM