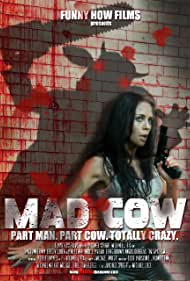 This movie kicks off with a woman blowing up a cow man or maybe a cow man zombie with an explosive sausage link. Well movie you have my attention! The opening credits roll with a Masterpiece Theater style page flipping sequence. Again, that is pretty funny. After the credits we see a cat jump scare followed closely with a clown jump scare/gag. Then the chef who was the victim of these is killed by someone or something. I mean given the name of the movie I’m going to assume the perpetrator is bovine in nature.

Our main characters are Charlize, a woman who works at a resort in the South African bush… heh that pays off in a really funny joke later. Also working there is detective Vince Chopper and his partner. They are undercover to investigate a mad scientist who works at a nearby company. This is the same scientist that creates the monster which goes on the killing spree. It is up to Vince and Charlize to stop the monster and all the zombified human cow hybrids it creates. Not sure how that last one works into the story, but it doesn’t matter that much.

Mad Cow is an insanely funny movie. Almost every scene has some sort of pun or joke as a payoff. Most of them land and many are set up (like the already mentioned South African bush) far ahead of time. From animal sounds that are clearly just people meowing, croaking, and growling to Vince’s inability to correctly identify the most basic animals of the surrounding bush the movie is funny. Two of my favorites are the pole dancer who is a polish guy dancing around in a I Love Warsaw t-shirt. The other is a bit spicier with Charlize on the phone petting the cat that just came in from the rain. When asked what she is doing she replies, “Just stroking my wet…” well I think you can fill in the rest. These are just a couple examples of the many jokes that had me cracking up. 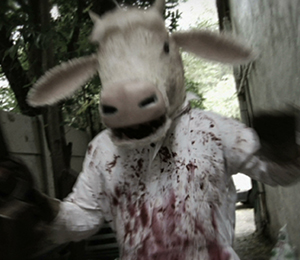 This is a monster movie, so I suppose we need to talk about the special effects. There are some kills including a cleaver to the face and a chainsaw thru the torso. These are great but given the tiny budget (apparently less than fifty thousand) they are impressive. The titular mad cow is funny and is just a dude in a suit. That seems entirely appropriate for this flick. They also do a decent job with the various infected/zombie humans. Again, it isn’t elaborate but given the budget and the fact that this is a comedy I was fine with what I saw.

I sit thru a lot of bad independent movies to review for the site. That is doubly so when they are supposed to be horror comedies. Being funny is much harder to pull off then being gross, but Mad Cow does an excellent job. This is one that I can recommend without hesitation. Find yourself a copy and get ready for ninety minutes of laughs.