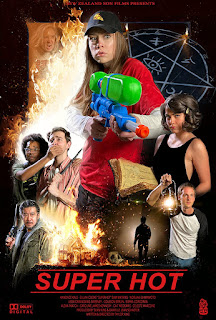 I saw a trailer for this on Amazon Prime and immediately was interested. It looked like one of those quirky low budget horror comedy flicks that I might enjoy. I had some issues streaming it but a few months later I remembered and tried again. It obviously worked this time.

The movie kicks off with some sketchy guys trading a book for some scarabs. I’m not sure what that is about since they never explain it. The ladies who get the book kill one of the guys and the leader casually walks by and tells him he is lucky that he isn’t her type. I suppose this is to show us that they are badass killers. After this we are introduced to Jackie, a delivery driver for Super Hot pizza. She is on her last day of work and at the end of her shift she hangs out wit her friends Sam and Kevin. We also find out that Jackie has a crush on her neighbor Carmen, who is moving into a sorority house.

The ladies from before are the sisters living in the house with Carmen. It becomes obvious that they are up to no good when they try to spike Jackie’s drink. Sam saves her but in the process the leader of the ladies, Monica, sends someone after them. For whatever reason they want them back at the house. Well, okay the reason is that they have a ritual they want to do that will grant them eternal life. But I think that they are already vampires… I’m really confused about the rules. They have fangs and supernatural powers but can also walk around in the daylight. Eventually a Van Helsing shows up and the bodies start to drop.

My biggest issue with Super Hot is that they never establish the “rules” for their vampires. Like I said it isn’t obvious until one of them pops fangs that they even are that. I mean do vampires age because that is their motivation for getting the book and capturing their victims. I get that this is a comedy and is playing it for laughs, but you still need to have a story that makes sense. This movie feels more like a series of improvised nerdy conversations that are loosely strung together by a faulty narrative about vampires, rituals, and resurrecting Dracula. Oh yeah, that is the goal of the ritual.

I did enjoy some of the nerdy stuff like shopping for action figures and talking about recasting marvel movies if they were made in the nineties. It feels a little bit like a Kevin Smith flick, only without the heart.  Still there are some laughs so they did the comedy well. My favorite gag is when Dracula shows up and has some old-fashioned ideas that our modern female vampires aren’t okay with. They don’t want to just be the “brides of Dracula” you see. The character of Warren Van Helsing is also fun, and he has some great lines. But it is also obvious that they are trying to do some world building as characters are introduced and go nowhere. Like his faire lady friend who is keeping his guns for him. There is clearly more to this story. We even get a stinger at the end that he will return with Sam in another adventure. I get the idea but maybe make the first movie good before trying to expand. 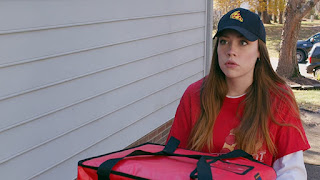 The kills are very disappointing. You get some snapped necks, a shotgun to the chest that cuts away quickly, and lots of offscreen stuff. The best of the bunch is a cut back to one of the vampires after a grenade belt blows her in half. You get to see the actress lying on the ground with her guts dangling out. Simple gag to pull off but it works. Other than that, there is nothing here. Again, I get that this movie was leaning into the comedy, but you still need to have something for the horror crowd.

I’ve been hard on Super Hot. It had a lot of potential and at times was fun but overall, it feels like a missed opportunity. I don’t hate the movie and if you are interested, I’d say give it a shot. That said I think this same sort of idea was far better executed in I Had a Bloody Good Time at House Harker.

Posted by Gutmunchers Lives at 10:14 AM