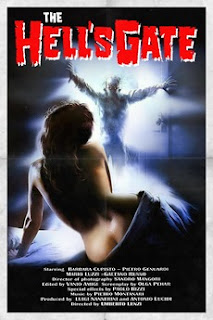 Sometimes you just need to buckle down and watch an Umberto Lenzi flick. Wait… am I only one that things that way? I certainly hope not. This isn’t because I think his stuff is awesome but because I’m the kind of guy that likes to share the misery.

People in the woods are monitoring a fellow researcher who is trying to set the new record for living in a cave. Because you know… science! He starts to hallucinate about weird religious images and then seems to disappear right in front of the cameras. Then we see a woman and her companion taking pictures of the ruins of an old monastery. They talk about how they are connected to a maze of tunnels and then they drive off. Sure enough right to the camp from before. A rescue mission is being sent down to find their friend and because they are archaeologists and have a map of the tunnels, they are able to force themselves on the team.

They go into the tunnels, the lights explode, they split up, and folks start to die! It turns out that seven Satanic Monks were locked away in the tunnels and after seven hundred years they are back for some vengeance. The rest of the movie is them trying to escape as they keep splitting up and dying. Do they make it out? Is it all a horrible fake out? Was this just a nightmare? I honestly don’t know. It is that kind of movie.

The story has potential with the monks and the underground setting. We start off with some cool camera angles and lighting so I had hope that this might be a good time. But after about half an hour the movie runs out of steam and became a chore to get thru. We get shot after shot of characters wandering around in the dark before something that can’t quite be made out gets them. While a couple of the deaths are interesting, we also get an extended spiders slowly creeping towards a terrified actor. And I do mean slowly as in please hurry up and kill this dude! Again, it was difficult to sit thru.

There are also some awful music choices as there is a loud synth soundtrack blaring over what should be creepy and quiet moments. There are a lot of these. Though I suppose I didn’t help by watching a VHS of The Hell’s Gate for this review. Though that seemed right somehow so I make no apologies.

We have a respectable seven kills, if of course it wasn’t a dream. There is an axe to the noggin, three knife stabbings, and my personal favorite a portcullis to the eyeball. That last one is a kill I’ve never seen on screen before, so I give them props for that. If you are hoping for some Satanic Monks done in the tradition of the Tombs of the Blind Dead, you will be disappointed. They can take many forms including normal looking guys in robes and slow ass spiders. None of them being at all memorable.

Listen I knew what I was getting when I sat down to watch a Lenzi flick. But even with that in mind this is a terribly monotonous mess of a movie. Other than a couple neat death scenes the story and pacing had me watching the clock for the last hour or so of its runtime. I can’t recommend this one at all.