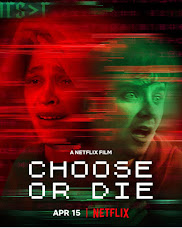 The story starts off with a man who by the look of his mancave is living in the past, specifically the eighties. With that in mind it isn’t too surprising that he fires up an old text-based adventure game on his computer and starts to play. What is unexpected is when the game starts to cause real life horrors to happen.

Then the action shifts to our main character Kayla. She is a streetwise computer programmer who has dropped out of school and spends her time working an evening job cleaning up a strange office building with a crew. When not doing that, she hangs out with a likeminded computer nerd named Isaac. He gets recycled old equipment and with that comes a copy of a game called Cursed. We soon find out that when Kayla fires it up it is the same game we saw played earlier. The real-life horrors start to happen as she is forced to play the game. Eventually we find out that the code contains an ancient curse or maybe a spell is more accurate. Either way she is forced to play it out. Which leads her back to the man from the beginning.

This is an interesting movie. I’ve not seen a story quite like this before with the video game or more specifically the code containing a curse. This adds a magical twist to the proceedings that is neat. Toss in the basic graphics of the old school text-based game, which if I’m honest was how I initially got hooked on computer games, and I was invested right away. I love it when I sit down to a watch something, and it gives me a story that I’ve not seen before. I was guessing until the end as to how it was going to end. Spoilers… who I thought they were setting up as the antagonist was completely wrong. I love it when this happens and to me shows that they spent a good deal of time and effort in writing a script.

I would call Choose or Die a gorefest, it isn’t that sort of movie. But there are a few cringeworthy moments and a couple of interesting death scenes. We have a waitress compelled to eat glass all while wondering what is happening to her. There is a lot of blood and crying which I found disturbing. Kayla also is dealing with some guilt over the drowning death of her little brother which pays off in a couple of ways. One is when the game forces her to choose between him and her friend Isaac. The other comes into play when she has to deal with the “villain” at the end. I won’t give too much away but this one is also a kick to the gut. There is also a tongue cut out, some family “modifications”. The best kill though is the death by video tape. Who knew living in an analog world could be so dangerous?

This isn’t a perfect movie. There are a few pacing issues and I wish that we had more of the kills and blood, but overall it isn’t too shabby. Again, the story is unique and plays out differently than I anticipated. If you get the chance to check out Choose or Die, I’d say you should give it a shot.

Posted by Gutmunchers Lives at 7:12 PM