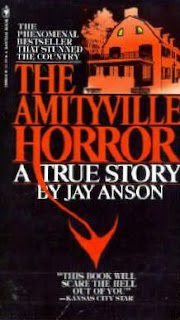 I've been threatening to do this for a while now and I suppose it is time. Despite me swearing that I'd never force myself to sit thru another marathon. The Witchcraft and Camp Blood movies were miserable. But then I realized that they have made a ton of Amityville movies... mostly because you can't trademark the name of a town.

So how bad could this be? That was a silly question to ask because I didn't realize the volume (almost fifty movies as of the writing of this!) and the familiar directors who would show up. But I've already started so I guess I can't tap out now. Plus I roped my friends from the Bloodbaths and Boomstick's podcast to do it with me. Damn it...

You may notice that the list is kicking off with part four and that the remake isn't included. I'll get around to the first three as well as Ryan Reynold's take on the most famous of haunted houses. I also want to let everyone know that I'm aware that the original story that was supposedly real is completely fake. With that out of the way I might as well jump in.

Amityville Horror: The Evil Escapes (1989) - This stinker has an excellent cast with Jane Wyman and Patty Duke Astin starring as a mother and daughter with a strained relationship. This isn't helped when an evil lamp is purchased from "the house" and sent to them as a joke. Turns out it isn't very funny.

The Amityville Curse (1990) - What can I say about this entry? Well I suppose the biggest takeaway is that it is a bait and switch. Come expecting a ghost or maybe demonic possession story and leave with a mediocre tale of a killer with daddy issues. Meh...

Amityville 1992: It's About Time (1992) - I guess if we have a lamp then a clock can also "contain" the evil of the Amityville house. This one has a great cast that is totally wasted on this mess of a movie. It also leans heavily on a narrative trick that I hate. Click above to see the entire review.

Amityville: A New Generation (1993) - So far we have had a haunted lamp and a haunted clock. Why not a haunted mirror that makes it's way to the west coast to bring the evil to an artists commune. Actually I'm sort of okay with the ghosts killing these hipsters. Still not a good movie.

Amityville Dollhouse (1996) - Let us run thru the list again. We have had a lamp, clock, and mirror. Is it that big of a stretch to see a dollhouse made in the image of that "famous" haunted house also being possessed by evil? Despite being terribly cheesy or maybe because of it I didn't hate this one.

The Amityville Haunting (2011) - After a lengthy hiatus someone realized that you could slap the name Amityville on your movie and not have to pay anyone. Of course the filmmakers that jumped first decided to do a found footage flick. Well this is going to suck...

The Amityville Asylum (2013) - Well they decided to shoot an Amityville movie in England while trying to sell it as being made in America. Spoilers... it doesn't work. The story is boring and the acting just awful. Seems par for the course with these Amityville flicks.

Amityville Death House (2015) - If there is a no budget franchise it is only a matter of time before Mark Polonia is going to try his hand at one. The fact that Fred Olen Ray produced and I had hope for this one. I shouldn't have. Bad CGI and an overly ambitious story kills it.

Amityville Playhouse (2016) - Well they shot an Amityville movie with England trying to be passed off as New York state so why not Canada? In fact why not just reference Amityville in our own crappy cultist worshipping Native American demonic spirit movie? This is yet another turkey...

Amityville Toybox (2016) - Every God Damn time I do one of these marathons I end up running into a Dustin Ferguson flick! I suppose since we have already had a haunted lamp, clock, mirror, and dollhouse there might as well be an evil toy monkey.

The Amityville Terror (2016) - This is less of an Amityville ghost story and more of an evil real estate lady having sex in a commercial kitchen flick! Honestly it isn't a good movie but compared to some of the other Amityville flicks I've watched for this marathon it is okay... I suppose.

Amityville No Escape (2016) - I had some hope for this entry and I wasn't disappointed. It comes from one of my favorite independent filmmakers working today, Henrique Couto, and he brought us a found footage entry that had an interesting plot with some twists I dug.

Amityville Evil Never Dies (2017) - After two installments that I didn't mind so much the franchise gets back to the crappy stuff with this installment from Dustin Ferguson. Sort of a sequel to Toybox this movie ignores everything from that except they recycle the evil monkey. God Damn it...

Amityville Exorcism (2017) - Time for Mark Polonia to toss his hat back into the ring for another bite at the Amityville apple. This time there is a haunted 2 x 4... I kid you not. Oh and it possesses someone so they can do their own budget Exorcist rip off.

Amityville Prison (2017) - Here we go again with a movie that was clearly never intended to be part of the Amityville franchise having the name slapped on it. This time a bunch of friends go to a prison to shoot a show about fear and being scared. They run into meth dealers that turn out to be aliens. Not a ghost to be seen and not one person mentions Amityville.

Amityville: The Awakening (2017) - Sweet baby Jeebus they made an Amityville movie that I really dig. There is a good cast on screen, a decent company behind the production, and most importantly a story with a twist that I didn't see coming. This is by far the most fun I've had with any of these movies in a while.

Amityville: Mt. Misery Rd. (2018) - Well the franchise followed up one of the best entries with this garbage. It is awful and pointless. This is more of a home movie where a dude shows off his wife's buttocks instead of making a movie with a plot and characters. Lovely as she is this is a miserable waste of time.
Note: I need to take a break from these movies. They are beginning to wear on me but I will be back with more reviews in a couple of months. Have no fear I'll watch and review all of these... even if it kills me!

Posted by Gutmunchers Lives at 3:43 PM