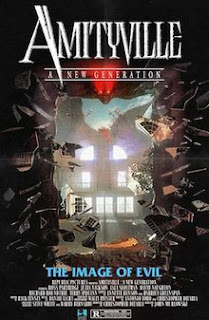 Time to check out Amityville: A New Generation aka. Amityville 7. This movie is set in a shitty neighborhood on the west coast. There is a warehouse that has been split up into artists flats with one of them being occupied by a guy named Keyes, who is a photographer. He is shooting some pictures when he sees an old homeless guy. He takes his picture and then tries to give him some money which is when the man gives him back a mirror. A creepy mirror. Soon that homeless guy is dead, and Keyes is interviewed by the police.

Spooky shit starts to happen when Keyes' downstairs neighbor, Suki, takes the mirror. It causes her to make these freaky painting as well as causing her abusive ex-boyfriend to run his head thru some glass. What is up? The mirror is from the Amityville house and Keyes’ father was the dude who killed his family there and after getting released brought the mirror out to his son so that he could be possessed by the demon that was in it. This happens because… I have no freaking clue!

Sooner or later I’m going to have to like one of these Amityville flicks, right? Well, this isn’t going to be it. The pacing of the movie is dreadful with long stretches of overly stylized shots of nothing happening. Okay I get it some of the paintings are very colorful, but how about we get some plot and characters up in here? The plot is very thin and easy to figure out. As soon as the homeless guy hands the mirror to Keyes, I knew it must have come from the house and that he was likely connected to both it and the man giving it to him. I do appreciate that he basically wants nothing to do with it and lets Suki take it, but then when she kills herself, he takes it back. Dude if it was already creeping you out why bring it home after your friend has died? This is the sort of nonsense that passes for a story, and I didn’t like it.

The dialogue is stilted and odd in that overly stylized nineties shot for cable way. It doesn’t feel natural and forces the cast of decent actors to struggle to spit it out. The cast features David Naughton, Richard Roundtree, and Terry O’Quinn in supporting roles. We even get a small appearance from Lin Shaye as a nurse in a psychiatric hospital. They are all wasted by this movie. Yes, Amityville: A New Generation manages to give Shaft and the Stepfather absolutely nothing to do! That is unforgivable. Instead, we get a bunch of young actors that clearly have no clue what they are doing and haven’t done much in the almost thirty years since. 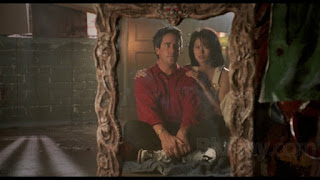 We get a lame three kills with little to no gore. The best gag in the movie is zombie Suki and even that is only okay. The budget is obviously very low which caused some very odd decisions. In typical movie fashion we have our romantic leads getting frisky not once but twice. Now in a classy flick they would shoot this in front of a roaring fire, but here they choose to do so in front of a shitty space heater. I kid you not! The evil mirror looks like a cheap prop you can pick up every October from Spirit Halloween so not great.

The best thing I can say about Amityville: A New Generation is that it is very silly. I laughed at it more than once, though I don’t believe that was their intent. This isn’t enough to save the flick and I can’t recommend it. Well, I guess we are on to the next one… Amityville Dollhouse.

Posted by Gutmunchers Lives at 12:58 PM