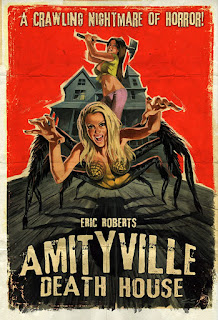 The torture… er I mean marathon continues with this entry from producers Fred Olen Ray and director Mark Polonia. This starts off with Eric Roberts voice telling us that a long dead witch is being allowed to return to the world to kill the descendants of those that murdered her long ago. Then we see a sheriff sitting in front of what I think is a green screen jail cell. He is watching a video of some “kids” when we flash back to them.

Tiffany is going to check in on her grandmother and is dragging some friends along with her. When they get to the house they find the older woman in bed with a spell book nearby. Then some random folks like a knife wielding squirrel hunter and some rednecks get killed in the woods by something. Eventually they end up in the basement where one of Tiffany’s friends turns into a spider and the others do some very silly stuff before the house burns down killing them all. Or does it? Yeah, it has a dumb tacked on ending.

I like Mark Polonia and Fred Olen Ray, but this isn’t their best effort. The story is terrible with nothing happening for long stretches other than them sitting next to the campfire or wandering around the woods/house. I’m not kidding because that is most of what we get. This feels like a project that they came up with on the fly without a script or even a fleshed-out idea of a story. Even at a mercifully short hour and ten minutes with extended opening and end credits meaning the actual runtime is closer to an hour Amityville Death House was a chore to get thru.

The cast is forgettable which is both a bad and good thing. They aren’t good, but also not bad enough to have stuck with me for more than five minutes after I shut off the flick. They feature Eric Roberts name prominently, but he phones it in, literally. They have him do a voiceover a few times during the movie to move the plot along and try to fill in the gaps. It is clearly not him in the hooded robes holding the special edition Anchor Bay Book of the Dead Evil Dead DVD. I’m not kidding. That is the prop they use for the demon who lets the witch come back to Earth and who is voiced by Eric Roberts.

You might have figured out with the last little tidbit above that the production values are bad on Amityville Death House. There is a lot of CGI which is especially bad when they try to show the house burning down. Guys if you can’t afford to properly shoot the script you then modify it rather than force some digital garbage down the audience’s throat. Also why cast a young actress as Grandma and then slather terrible makeup on to “age” her up a bit? You really don’t know an older lady that can lie in bed. There is little to no dialogue involved. The kills are also tame and just off screen. The only thing I sort of liked was the spider lady. It was cheesy but sort of fun.

Posted by Gutmunchers Lives at 2:39 PM