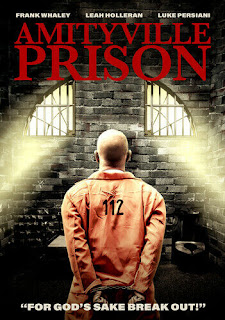 The movie starts off with an interrogation of a woman by what I think must be a police officer or maybe a Fed. She is covered in blood, and he tells her that he is sorry about what happened to her friends. So that is probably a bad thing. He asks her to tell him again what happened and that is where the main plot of the movie kicks off.

Our lead is with a group of friends hanging out and bullshitting about stuff. They hear their friends upstairs having sex and filmmaker Hank decides to sneak up and film them going at it like bunnies. Well, I guess that is something that friends do now… Eventually they start to talk about his career and as a result Hank offers them money to go to the local haunted prison, Holmesburg, to shoot his next big reality show. They agree and off they go. Eventually they get trapped in the abandoned buildings and are picked off one at a time until it is just our final girl and the police who show up. Which is why she is sitting in a room being interrogated.

So that is the end, right? Well not really. In an interesting twist it seems that the kids stumbled onto a hidden meth lab and the gas mask wearing killer was one of the guys running the illegal operation. This is despite Hank going on about how the prison is laid out like a crop circle and spewing nonsense about aliens. Though we see that all the guys working the lab are dead and when shots ring out sure enough a damn alien walks thru the door! Roll credits.

I want to give them credit for an interesting plot. I loved the whole misdirection when I thought it was going to be a bunch of drug dealers and not anything supernatural. That was a neat twist and very creative. But then they ruin that with the stupid reveal of the alien at the very end. Why was that necessary? Spoilers… it wasn’t. That twist added onto a twist left a bad taste in my mouth. I was already on the fence with Amityville Prison due to the at times terrible pacing and found footage shaky camera style, so this just pushed me into the negative review territory. 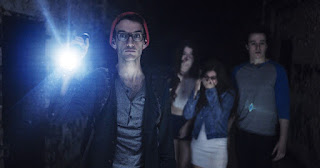 I guess I should also mention something else. As you may or may not know there are a ton of Amityville movies being made. That is because the name is that of a town so pretty much anyone can make a movie with Amityville in the title. But this goes even further than that because it was shot as Against the Night and is set in Philadelphia. Not once in the movie does anyone reference Amityville nor does the plot make any connection to it. Again, it also switches from a drug dealer to an alien monster movie never venturing into a ghost storyline at all. So far this is the most egregious attempt at slapping the name on a movie to garner interest and get distribution.

Is this a terrible movie? Again, the plot twist ruined it for me, and I had other issues with Amityville Prison. In the end though I have to admit that I’ve watched much worse. While I still can’t recommend Amityville Prison if you must watch one of these low budget entries then this one is okay, I suppose. Still there are much better things to check out.