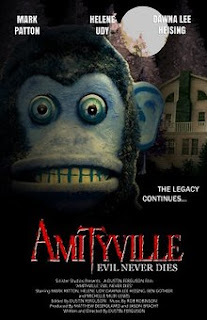 This is the sequel that was hinted at with director Dustin Ferguson’s Amityville Toybox. By that I mean it totally ignores the tacked on ending of that movie where they had to pad it out with a couple unrelated characters. But the toy monkey is back. This time it is purchased by a couple and brought home. It makes him act like an abusive ass and gives him awful CGI nightmares. The wife eventually figures this out and throws it away, but it returns because that would be too easy. Then Ferguson does what is typical for him and recycles a bunch of footage from Toybox to pad out this movie. I mean why spend time and money when you can make the audience watch shit that you have already released?

There is also a bit at the opening of this movie with some characters that break into the house from Amityville Toybox only to get killed! Does that connect to this story or somehow bridge the end of that flick into this one? Nope. That would require some thought to be put into the story and script. Ladies and gentlemen that just isn’t what this director does.

Just in case you haven’t read my reviews of Ferguson’s Camp Blood movies or his earlier attempt at an Amityville movie then let me clue you in on something. He puts no effort into what he does and recycles footage so he can “double dip” into the audience’s wallets. Let me explain with this latest example. The movie is a bit over an hour long. It has long end credits and again reuses about fifteen minutes of “highlights” from the previous movie. That means there is maybe forty or forty-five minutes of new footage in Amityville Never Dies. I suppose that would be okay if it weren’t for what that footage entails. 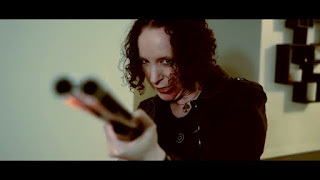 The husband goes for a drive and picks up a hooker. Though most of this sequence is him driving around aka. they just sit in the passenger seat and film him cruising around town. I’ve seen driver’s education flicks that are more exciting than this. We also get to watch the wife wander around the park, look at some fish, make some sketches in her notebook, and then send some text messages. Just to be clear these aren’t quick cuts to establish locations or characters they go on and on. We also have an exterminator show up to poke around and talk to the wife about the nonexistent rat problem that her husband keeps talking about. This amount of padding makes me wonder why I’m watching this “movie” at all.

There is some terrible audio issues where the dialogue cuts in and out constantly. That means in addition to being mind-numbingly boring many scenes are also impossible to hear. Then again maybe that is a blessing in disguise. The kills are lame and mostly happen offscreen. The only gag that I enjoyed and will give them credit for is a bit with some eyeballs that pop out. It isn’t great but they do it with practical effects work. I appreciate that sort of thing.

I don’t understand how Dustin Ferguson gets away with making movies like this. Who is buying this shit? Please take my advice and don’t spend your time or money on this or any of his other movies. In conclusion after having a couple okay Amityville movies I’m miserable again. But I’ll keep hope alive that there is something better coming my way.

Posted by Gutmunchers Lives at 3:32 PM